I used to live in London, so I’ve got most of my tattoos there. I got my insteps tattooed first. They were tattooed ten years ago, when I was 20 years old. The other tattoo is a turquoise butterfly, the other a pink butterfly. I didn’t plan my first tattoos almost at all – my friend just got a tattoo first, and I started to think that maybe I could get tattooed as well.

The tattoo parlour was a bit shady, and therefore I’m not very pleased with these tattoos. On the other hand, I guess these aren’t as bad as I think they are: when I’ve shown these to a couple of tattoo artists, they’ve just commented that these are actually quite okay, and they’ve seen a lot worse during their career. So maybe these really aren’t that bad after all!

After the butterflies things really got out of hand, and after a month I was already getting my next tattoos. The seahorses on my thighs were tattooed at the same parlour as the butterflies. 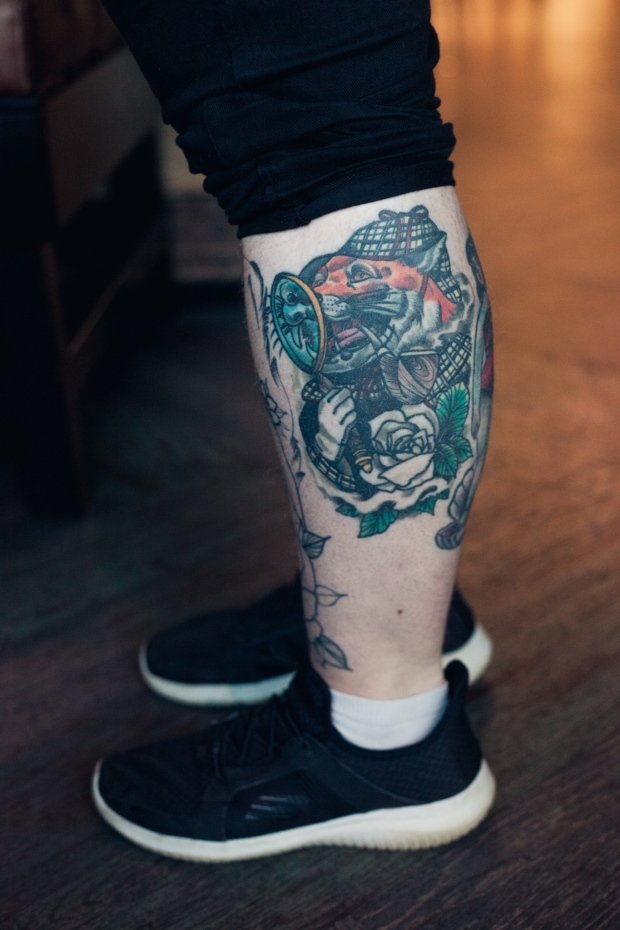 The detective fox is artwork by Jamie Molin.

Both of my arms are dedicated to a certain theme. My left arm is inspired by Alice in Wonderland. I got the flamingo tattoos first, and it was only after that when I realized hey, these could be a basis for a whole theme! 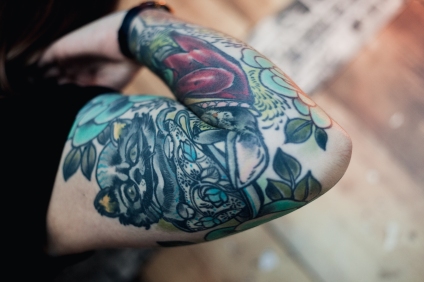 My right arm is inspired by the TV show The Animals of Farthing Wood (in Finnish: Kaukametsän Pakolaiset). My arms are also tattooed by Tiny Miss Becca. 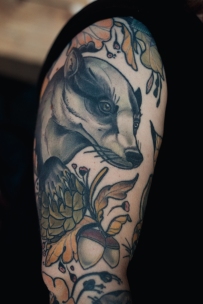 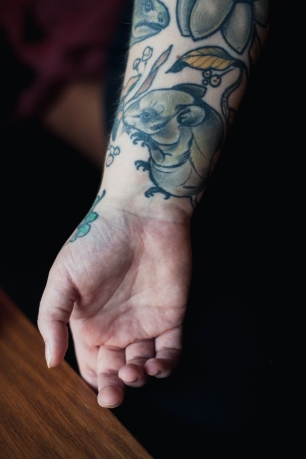 I have no favourite tattoos in particular, but the tattoos of my pet chinchillas Beetle and Juice on my hands are very dear to me. These are also Tiny Miss Becca’s artwork, as well as the pine cone and the acorn next to them. 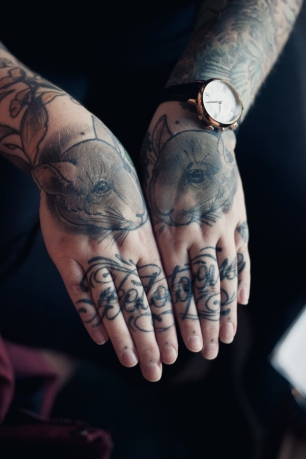 My backpiece project by tattoo artist Iris Lys is still in progress. The tattoo depicts my cat in his favourite position. I guess the whole project is still going to take maybe four or five sessions before it’s ready. My personal limit goes approximately in five hours of tattooing per appointment – that’s the longest time I’m able to cope with the pain. Iris Lys has tattooed a couple of smaller tattoos on my skin as well. 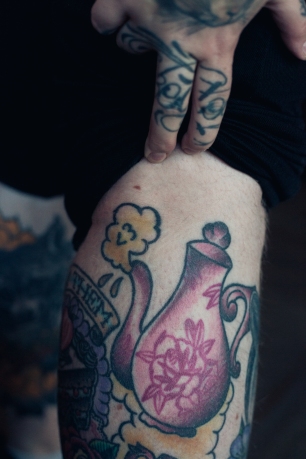 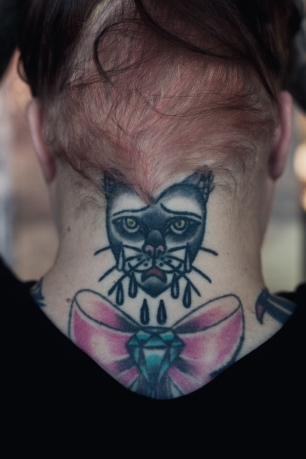 I’ve received many kinds of feedback considering my tattoos, but most of the comments have been positive. Sometimes even complete strangers have come to admire my tattoos and asked who made them. Luckily, no-one has ever criticized my tattoos at work. I used to work in customer support over the phone for six years, so I didn’t really have to pay attention to what customers might think about tattoos – after all, they can’t even see me while we talk!

Of course, the attitude towards tattoos can be completely different depending on the culture. For example, when I was in Canada, nobody cared about my looks since tattoos are so common in there. In Japan, however, tattoos gathered more attention and one elderly man even condemned my tattoos out loud while going past my boyfriend and I on the escalator.

In Japan, I also had another interesting encounter considering tattoos. We had arrived in Tokyo early in the morning, and while we were walking to our hotel, we walked by an old man who was smoking a cigarette in front of a little shop. As he saw us, he started to wave at us to come closer.

The man couldn’t speak any English, but he eagerly pointed at my tattoos and I could spot a couple of words here and there – mostly kirei, kirei, which means neat or beautiful. Then he lifted his own T-shirt and we saw this huge, colorful dragon tattoo that covered his whole back. Since we didn’t share a common language, we couldn’t quite catch what else he was saying, but as we talked about it afterwards, it was quite clear that we’d both had the same impression – guess we just encountered a member of Yakuza…

My boyfriend is currently working in Saudi Arabia, and I’ve been planning to visit him during the spring. Of course I feel a little nervous about the idea, but on the other hand, I think I will be able to handle things so that my tattoos won’t be visible to other people or gather any attention. At least it’s good that I don’t have any religious tattoos or any other strong symbolism on my skin – that’s what makes nature-themed tattoos quite a safe choice compared to many other themes.

Both of my shins are tattooed by British tattoo artist Amy Savage.

I was born in Vantaa, Southern Finland, but I’ve recently moved to Lapland to study. Originally, I fell in love with Lapland on our trip to Kilpisjärvi a while ago – the peace and quiet was really incredible!

Last year, when I went to visit my new school in Tornio for the first time, I also noticed an interesting difference considering tattoos. As I visited the local shopping centre, I saw many heavily tattooed people, so I was easily blended in the crowd. When I traveled back home, I spent a couple of hours in the neighbouring town Kemi and noticed how there were much less tattoos to be seen and instead, people seemed to stare at my appearance. It’s strange, really, how the atmosphere turned completely different, even though the two cities are located only a little over twenty kilometres away of each other. 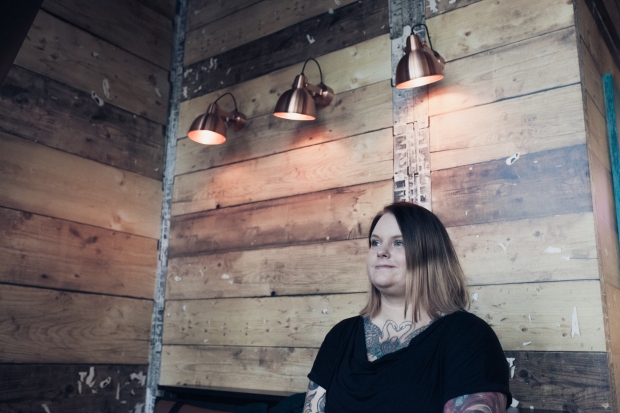 All except my finger tattoos have colour in them. I know some people think that the colouring is the most painful part of tattooing, but for me, the lines have always been a lot worse. I think the fingers were my most painful tattoos in general. I still love them, though – especially now that they’re ready!

My fingers were tattooed in two parts. After the first session, my tattooist Linda Räihä and I made a deal that I would book the second session whenever I feel that I’d be ready to take it. In the end, it took a year until I thought I’d finally be able to handle it. I’m also planning to get my palms tattooed in the near future, and I’ve already decided who will be the one tattooing them. Still, I think I have to muster up my courage before I’ll be able to book the appointment. 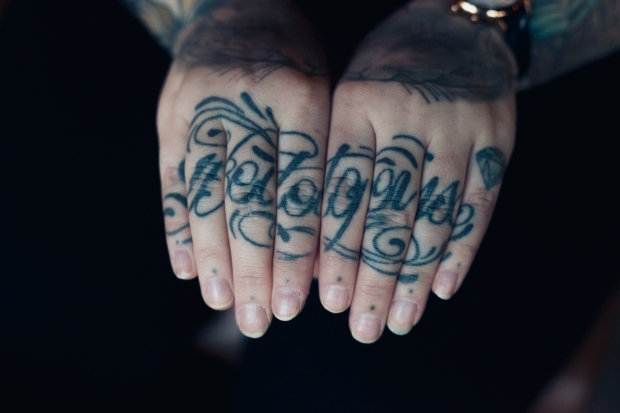 For me, getting tattoos means collecting art on my skin. Most of my tattoos are by the same artists. It’s important that the tattoo artists I choose have their own, individual style.

In the future, I’d love to get tattooed up to my neck. I constantly come up with new tattoo ideas, most of them related to animals or nature in general. At some point, I’d like to get at least a sloth tattoo, a Canadian-inspired beaver tattoo, a humpback whale tattoo… There’s still empty space left on my skin waiting to get tattooed! 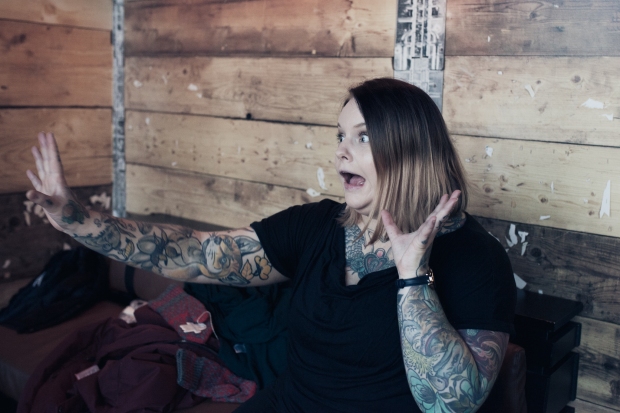