I guess I became interested in tattoos partly because of music. I listen to rockabilly, psychobilly, punk and that sort of genres where the tattoos are a big part of the whole picture. Tattooed people have always looked good in my eyes.

When I got my first tattoo, I was 20 or 21 years old, so I had already been of age for a while. I paid my first tattoo with my student loan. I was eager to get a tattoo, and I spent lots of time thinking about the design. Finally, I ended up choosing something classic and easy: a butterfly. I have no idea where the guns came from – I guess the idea was based on some good-looking design I had seen on the internet. 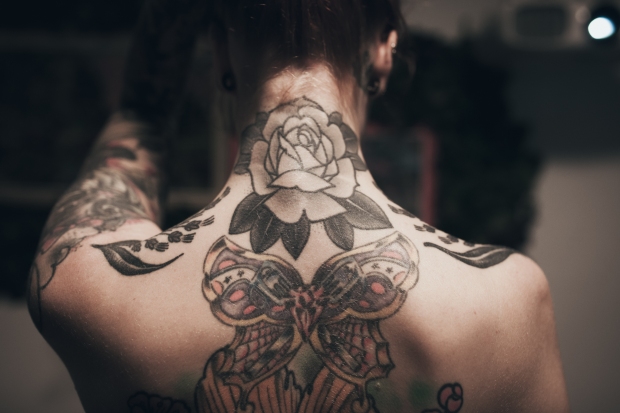 As far as I remember, I got my second tattoo within the same year. The text in my chest piece is taken from a song by Kingston Wall. The lantern and the butterflies were tattooed afterwards since the text itself was pretty poor quality. My original intention was to get the text much smaller in the first place, but the tattooist decided to go his own way in the design.

After that, I’ve wanted to make sure that I’m always able to see the design beforehand – at least by e-mail if there’s no other way. Luckily, nowadays I know how to choose the artists who know exactly what kind of style I want to get on my skin.

I’m from Joensuu, and the Karelian pasty refers to my roots in Eastern Finland. 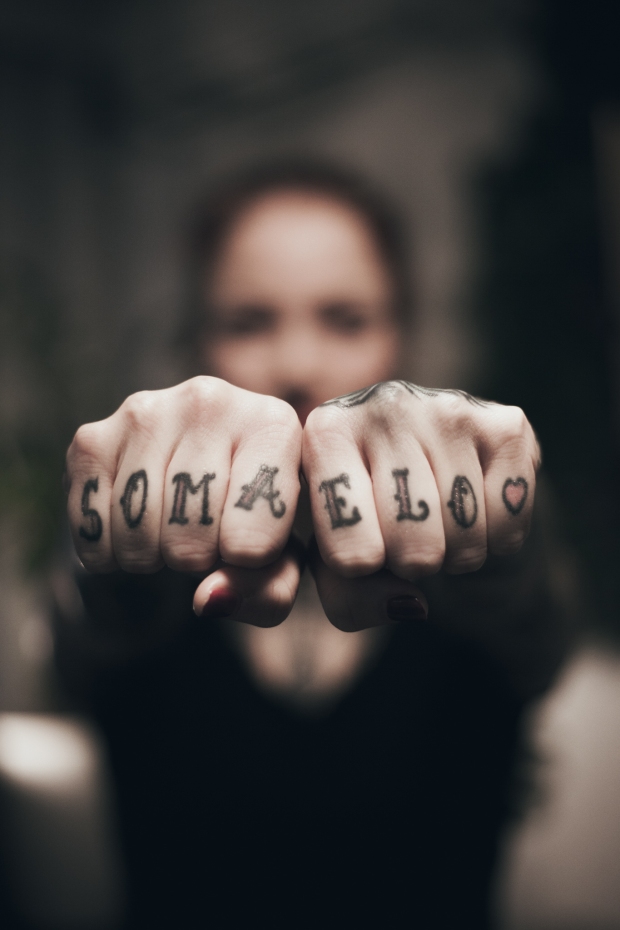 For some reason, I always have to explain my finger tattoos to others. Although soma elo is plain Finnish, somehow people just don’t seem to get it. It means a “life is great”-type of thing.

Many of my tattoos are animal themed. The doughnut-eating rat is tattooed by Legacy Tattoo’s Jussi, and it’s based on a flash by Samuli. The crosseyed wild horse is by Tommi PDC. 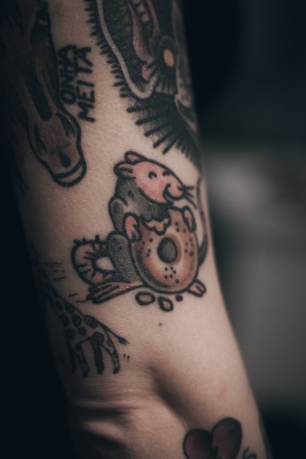 My backpiece is artwork by Juha Lensu from Lappeenranta. The tattoo is made in three parts: on the first session he tattooed the lines, on the second the shades and on the third session the rest of it. I recall the making of this tattoo took maybe eight hours in total.

The scorpion is a walk-in tattoo that was tattooed by British tattoo artist Rich Hadley during his visit in Finnish tattoo studio Tatuata.

The birds on my thigh and calf are both tattooed by Legacy Tattoo’s Samuli.

On the back of my thighs, I have tattoos of my dog and a sugar glider. The sugar glider reminds me of a trip to Thailand. My plan is to start filling my legs below the knees next since there’s still lots of empty space left. 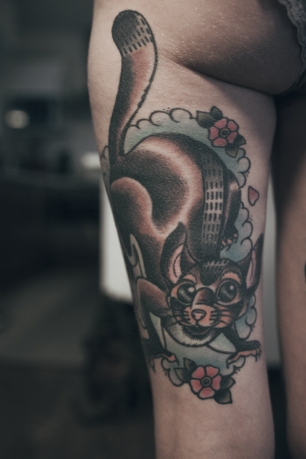 I’m not ashamed to say that I use skin numbing products whenever it’s possible. I know what pain is, and I also know that I don’t need to put up with it if there’s any way to avoid it. If the tattooing lasts more than two and a half hours, I willingly choose Emla or some other numbing stuff if possible. Even the whole sound of the tattooing machine sends shivers down my spine!

The sternum tattoo was the most painful of my tattoos, there’s no question about it! Luckily the tattooing itself lasted only 90 minutes or so. The tattoo is done by Miila from Tatuata.

I love traveling, and I’ve been to nearly every continent during the years. Many of my tattoos remind me of those trips. I always keep my eyes open during the journeys in case I see something worth tattooing – a particular animal or something like that. Still, I usually won’t get tattooed until I’ve returned to Finland.

The dolphins and the pelican, for example, are memories of my travels.

When abroad, people sometimes start staring at me and taking photographs. I used to have blond hair, and it seems that a tall blonde with tattoos is some kind of sight for many people. And as someone takes their camera out, soon everyone will follow the example. The same happened many times in Asia and Brazil, for example.

Although my tattoos seem to draw attention abroad, I seldom get negative feedback because of them. Most of the people are interested, that’s all. However, I remember one time in the States when a woman refused to sit next to me on a bus since she thought I was the white devil.

In general, I’ve heard more negative comments concerning my tattoos in Finland than abroad. Usually the most eager to comment are elderly ladies who start asking questions like “why did you do it?” The latest encounter happened when I was shopping, and an unknown woman glanced at my chest tattoo and asked rudely, whether I have ever regretted getting it. The question left me feeling pretty confused. I wonder why did she even bother to inquire something like that from a complete stranger?

Later I started to think about how upset someone could get if they really regretted their tattoo and some stranger would start asking questions like that. I wonder if it makes the questioner feel somehow superior if they heard someone saying “yes, in the matter of fact I deeply regret this tattoo”?

My family isn’t very enthusiastic towards tattoos, but they have nothing against them. I have a big brother and a big sister, and only my sister is tattooed as well. When I turned 30, my family paid me a tattoo as a birthday present. There was one condition, though: the tattoo had to be related either to my family or my childhood.

When I was a child, I was called a reed flower, so I decided it might be a good choice for a tattoo. As I googled the reed flower, I discovered that it certainly ain’t a pretty flower, but who cares! I think it was lovely in general that my family had clearly picked me a birthday present that fits my personality. I was very flattered about it.

A couple of my tattoos are associated with my former relationship. Although we broke up with my ex-husband a couple of years ago, I have no need to cover up the things that remind me of him. After we broke up, I got these two text tattoos that say stay strong and pleasure seeker. Pleasure seeker is a song by Social Distortion, and I find the lyrics very relatable.

Älä jätätä (in English: Don’t slow) was one of my first tattoos. It reminds me that you always have to keep going forward.

Especially small tattoos are something that I can get very spontaneously. I don’t need to consider six months beforehand if I want to tattoo a friend’s name or a nice memory on my skin.

I think small tattoos are great because you almost can’t feel when they’re being done. You just chat an hour or two with your tattooist and it’s done. On the other hand, I often even forget where my smaller tattoos are located. It’s kind of funny – you do remember having some particular tattoo on your skin, but you have no clue where it is!

The broken heart is a friend tattoo. The numbers refer to Julma-Henri’s song called 170306. One of my friends got tattooed first, and afterward she noticed “fuck, there’s a number missing from the tattoo!” As we had already agreed to get the same kind of tattoos, we all ended up getting the numbers wrong.

All my tattoos pretty much represent the same kind of style, old school or old school with a little new school touch. I haven’t been messing around with different tattoo styles much. The tattoo subjects, on their part, may as well be something dumb.

Topi was a cockroach that I had to kill during my trip to the US. After the incident, I was feeling kind of bad and I thought I should honor his memory somehow. 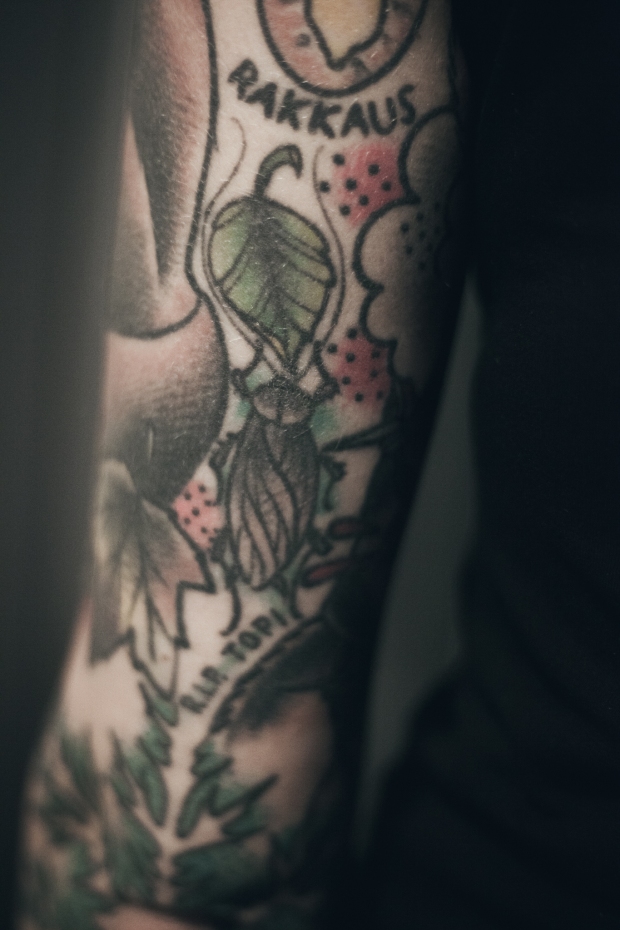 During the last tattoo convention in Helsinki Zombie Tattoo’s Matzon had a few flashes with all these dick stuff in them. I found the dick turtle the least provocative of them.

When Samuli from Legacy tattooed my calf, I noticed he had made some flashes that were little different from his original style. I immediately thought “holy shit, that giraffe is super cool!”

I love tattoos because without them I wouldn’t be the same person. I think tattoos look good, and at the same time, they are one of my best features. If someone asks me “what do you find beautiful in yourself”, I’m happy to answer that my tattoos, for one, are beautiful. I’m so proud to have them. 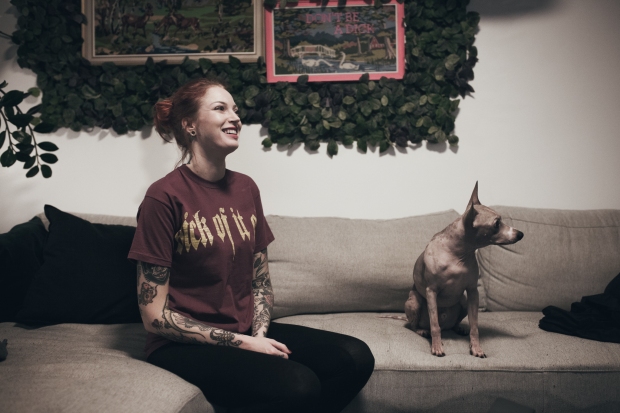