I got my first tattoo when I was 18 years old and still living in my hometown Hyvinkää. I noticed that there was a new tattoo artist in the neighbouring town, Riihimäki, and since I thought her artwork looked nice, I decided to book an appointment.

I had a cool plan about a big lotus flower tattoo with birds and all. The tattooist even made the stencil ready, but in the very last moment, I got cold feet and decided to get some small stars on my upper back instead. 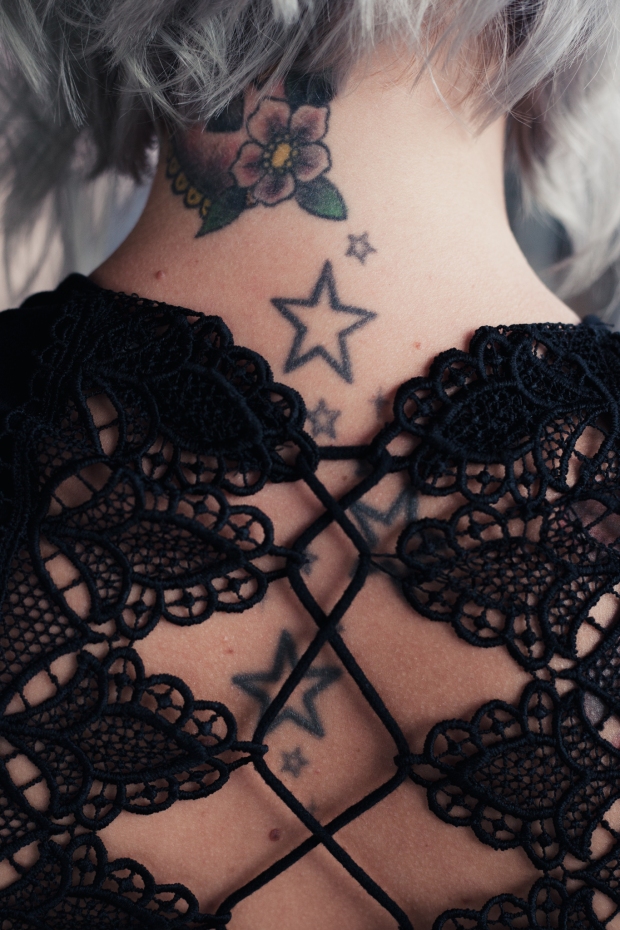 After the first tattoo, I’ve been getting more tattoos on my skin at a steady pace. Most of my tattoos are done by a friend or someone I personally know. Often I’ve been honoured to be a practice skin for someone who’s still learning to become a professional tattooist.

Many of my tattoos are done somewhere else than in my home country, Finland. I lived abroad for a long time, and those tattoos remind me of the experiences I had back then. Tattoos on my other arm are artwork by my friend Basia who currently works as a tattoo artist in the Netherlands.

The ankle tattoo was done by another friend of mine in the Netherlands. This was the second tattoo my friend had ever done, and I guess you can somehow see it in the result.

I used to be a somewhat restless soul when I was young. When I was 16 years old, I was volunteering in Sambia, where we built chicken coops, tomato yards and lavatories for the local people. In my twenties I had long dreadlocks, I listened to Manu Chao and travelled across the world.

I must admit that I sometimes wonder how my parents allowed me to travel at such a young age! They’ve always had a very relaxed attitude towards everything. They’ve just thought that it’s okay to experience things and make your own mistakes, but you must remember you’re always welcome to come home if you want to.

My mum used to work as a model when she was young, and this tattoo is made after her model photo. 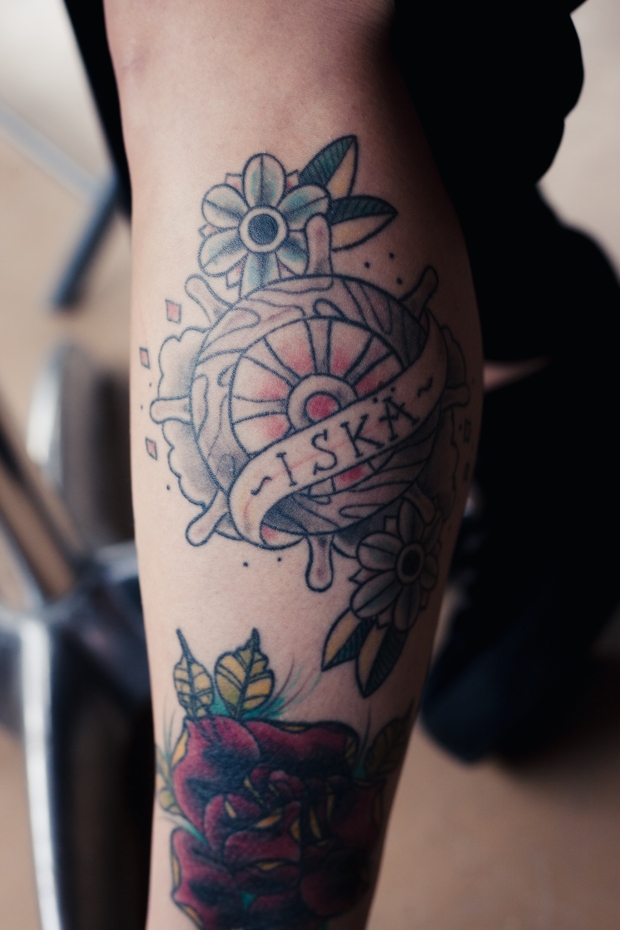 I also have a tattoo dedicated to my dad.

I also have some negative memories about travelling, which are related to volunteer work I took part in when I was 18. Back then I moved to England, where my job was to gather clothes for UFF via an organization called Humana People-to-People. The goal of the work period was to gather money in order to participate in a volunteering program in Africa. In the end, I never made it to Africa, and the whole volunteering turned out to be very different from what I imagined.

In England, we had a group of young volunteers all over Europe. We lived in a small house, surrounded by strict rules and discipline. Every morning we were given maps with our daily gathering route marked on them. We marched the whole route by foot, eight hours a day.

After the organizers decided we had done enough work in England, we were sent to Denmark into a training centre in the countryside. The centre was located in a large building which had two separate sides: the first half was our training centre, the other half a halfway house for Danish inmates who were supposed to be reintegrated into society. There we watched inmates playing with knives in the kitchen and all that kind of stuff. Our so-called training mostly meant that we tried to gather money for the organization by selling their magazines in the streets of Copenhagen.

The whole project had begun to seem a bit shady, but we finally woke up to the situation as we were sent to work on a construction site. Imagine a bunch of kids living in some shithole surrounded by heater blowers, ordered to build a house without any payment at all – that’s when I finally decided to put an end to my journey. 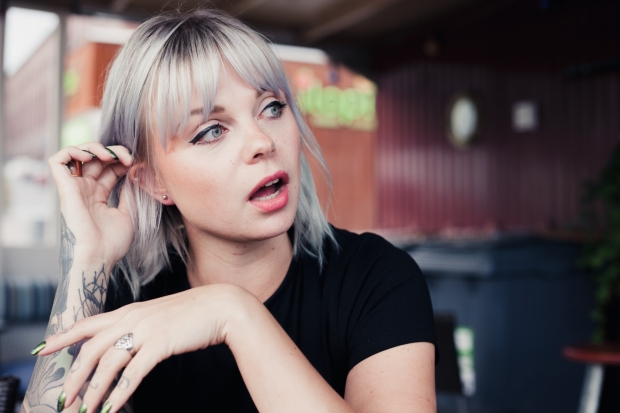 I quit along with a few other volunteers. Of course the organizers yelled at us quite a lot as they heard of our decision. Later we found out that the organization that was responsible for the volunteer work had been in court a while ago for their suspicious acts, and their leader had slipped away to another country during the process.

After leaving the project I moved to Copenhagen. There I spent a year working as a waitress and saved money for a trip to South-America. I went to Brazil, Uruguay, Paraguay, Argentina, Bolivia, Peru… From Peru, I headed to Mexico and then back to Europe. Unfortunately, I didn’t get any tattoos during that trip!

My tattoos don’t have any unified theme. Instead,  they are separate memories of special people and places. I think that’s also the reason why I don’t regret a single of them – they are all memories on my skin. 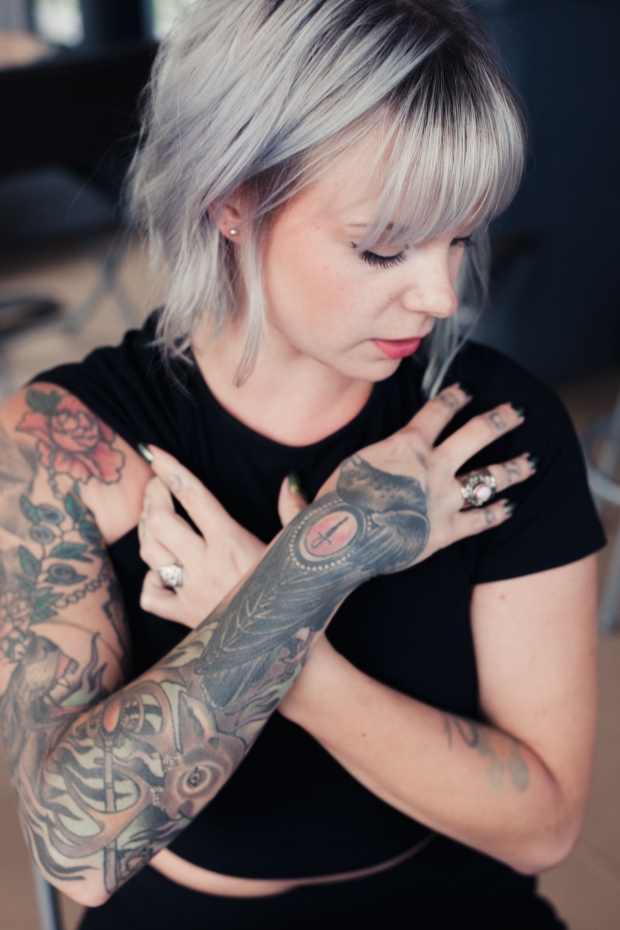 Although I don’t regret getting tattoos, I guess some of them could’ve been done better in the first place. I have one cover-up tattoo that covers a memory of a certain pre-Christmas party. After moving back to Finland, I worked as a piercer in a tattoo studio called Kustom Works Tattoo in Savonlinna. Once we held a pre-Christmas party, where a non-professional tattooist tattooed me a Kustom Works -themed tattoo with his own signature and all.

On the next day, my workmate just looked at the tattoo like Riina, for fuck’s sake. I had the tattoo for a couple of months until I got a proper, rose-themed tattoo as a cover-up.

Once I wanted to try if I had any skills in tattooing. I made the lines of this anchor tattoo myself, and let a friend tattoo the rest of it. I guess my friend also might’ve enhanced the lines a bit, to be honest!

I got this tattoo during my years in the Netherlands when I was feeling homesick. The arrow points to heart and North at the same time.

The bear tattoo is dedicated to my sister. We decided to get sibling tattoos, and since my sister is such a pedantic person, I let her decide the theme of our tattoos. She decided that there must be a bear and the constellation Plough (suom. Otava) included. She chose herself a beautiful design with some forest and the silhouette of a bear. I, on the contrary, decided to get something different.

We are both born on the same day, 20.11, so the date on the tattoo refers to our common birthday. Many of my tattoos are by my boyfriend Sami Yrjölä, this one as well.

The cap is an essential part of this tattoo. When my sister and I were still small, our family often went for a vacation somewhere abroad. Once our parents wanted to get some time of their own, so they rented a couple of donkeys with their guides and sent us girls on a little donkey trip. So there we were, my sister and I, in the middle of a hillside, riding donkeys. I wore a new Flintstones-cap, but the strong wind blew the cap off my head and sent it on its way. I was upset about the loss for many years, but now I have the cap again – and this one will always stay with me!

I didn’t use to pay much attention to the placement of my tattoos, but nowadays I try to think more about their symmetry. My other sleeve is so packed with tattoos that I want to keep my other arm emptier to remain the balance. 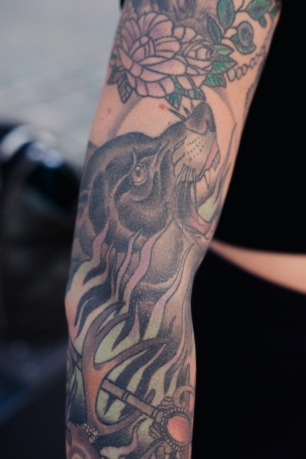 In the future, I’d like to get a tattoo dedicated to my grandparents. I’ve been planning to tattoo a swan and my granny’s favourite flowers, forget-me-nots. The same flowers also grow in the yard of our summer cottage. The cottage is a meaningful place for us, so there would be many important meanings combined in the tattoo.

I used to have a dog who lived until 16 years old. He was such a great dog with a very strong will.

The lock tattoo is dedicated to one of my oldest friends. She has a key tattoo as a matching pair to this one. This tattoo reminds me of the importance of maintaining a friendship. I’m grateful to my friend for staying by my side all these years even when I’ve been wandering all over the world.

When I was young, I had difficulties staying in one place for a long time, and in a way, I still recognize the same restlessness in myself. Whereas earlier I spent lots of time travelling, nowadays I channel my energy to my work.

I currently work as a hairdresser at hair salon Rasta in Tampere, and I belong to Pulp Riot Squad which is specialized in creative hair colouring. I love my job and I want to be great at it, so I’m constantly working to improve my skills even more.

I guess my restlessness can also be seen in how I get excited about new tattoo ideas – sometimes it happens so easily that my earlier plans can even be left unfinished. The Marilyn tattoo by Sami is still in progress, as I already had a new idea in mind before this was ready. This tattoo will be ready somewhere in the future.

Soon I will be 30 years old, and I couldn’t imagine spending all my time travelling anymore. At some point, the constant change just starts to feel harder to stand – when you’re travelling, people, places and all those things are just temporary.

I’ve lived in many places, but I definitely think it’s the people, not the location, that leaves you the best memories. Places don’t feel the same if you don’t have the certain people living there as well. Amsterdam, the city of my young adult years, just isn’t the same for me anymore, as most of the people who I used to hang out with have now moved away. For me, memories are made in the moments with the people I love, and tattoos remind me of those special moments.

This tattoo is dedicated to my boyfriend and our daughter. My boyfriend has the same kind of tattoo in different colours.

My finger tattoos also bring back good memories from the time I lived in Savonlinna. I had been dreaming of getting my fingers tattooed, and finally, Akseli from Kustom Works carried out my wish. 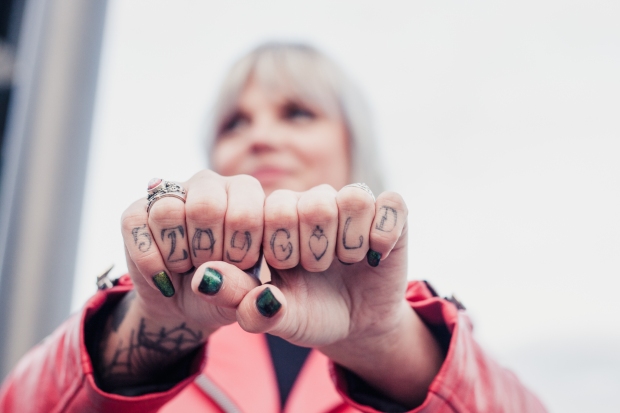 At first, I was planning to get a text “good shit” on my fingers. As I told him about the idea, he just replied to me: “Now listen, Riina, you can’t do it – imagine when you’re a granny, and you’d have a text that says good shite in your fingers!”

So, I had to figure out something different. Finally I got another idea that was inspired by my gloves. They had this same text written on them, so I just decided yeah, let’s go for it. Stay gold is just as good. 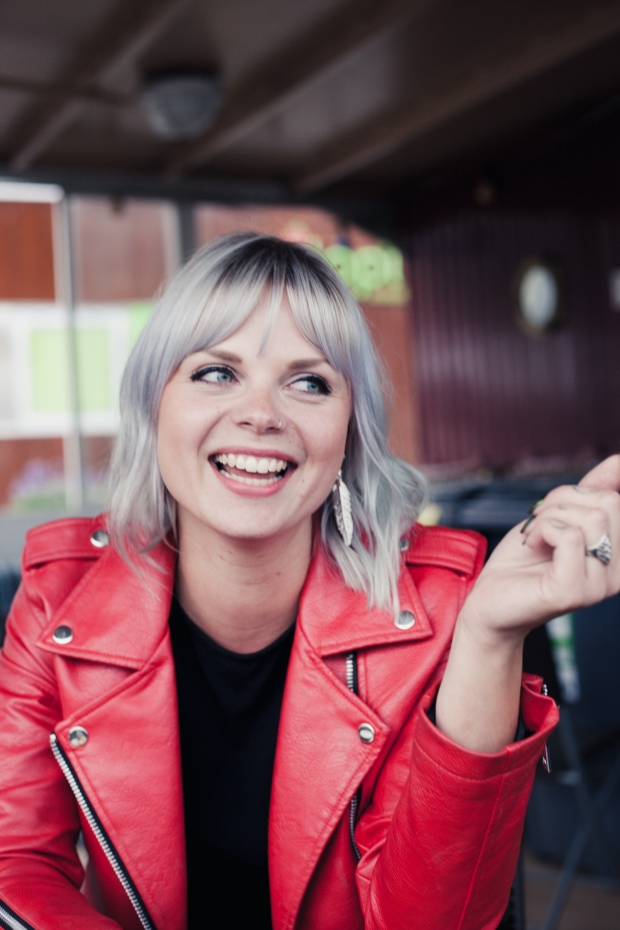