I’ve always thought tattoos are a great form of art. Ever since I was a kid, I’ve been listening to both rap and metal music where being tattooed is part of the imagery. When I was in junior high, I used to hang out with tattooed friends who were a couple of years older than me, and I remember thinking about getting tattoos someday as well.

I guess I had just turned 18 when I got my first tattoo. I knew one guy who made tattoos for his friends at his place, and he made my first tattoo as well.

The reaper tattoo is associated with music. I recorded my first rap songs in 2004, and I’ve always made music under the same artist name, Painajainen (in English: The Nightmare). Still, I didn’t want to get a plain text tattoo with my artist name on it, so I thought the reaper would be a legit choice as a symbol of a nightmare. 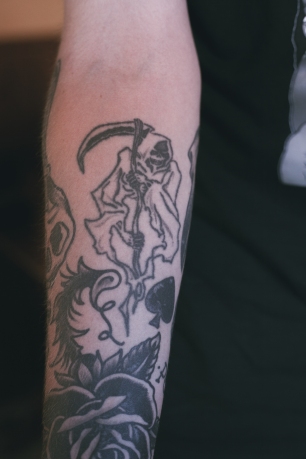 The reaper is made after a drawing by my former classmate from junior high. During those days it hadn’t yet occurred to me that an image that looks great on paper might not look as great when it’s tattooed on your skin. My intention was to get the tattoo fixed by darkening the shades, but the guy who tattooed this suddenly quit tattooing and I haven’t heard about him ever since, so I kind of forgot about the idea.

I got my second tattoo at a local bar in Helsinki. The result was somewhat crappy, to be honest, so later I got it covered up with a much better piece. After that, I had a long break before I got my next tattoos. Even though I had lots of ideas on my mind, they were never concretized to my skin.

In 2016, I found a good tattoo artist and decided it’s time to cut off the waiting and get tattooed at last. My old friend Olli started getting tattooed by Taneli Jarva at Tatuata studio in Helsinki (link). I was really impressed by Jarva’s artwork and when Olli told me he was a nice guy, too, I decided to contact him as well.

I like Jarva’s tattoo style, and everything has just fallen into place with him from the beginning. When I throw him an idea, the design that comes back is always something that satisfies both of us. 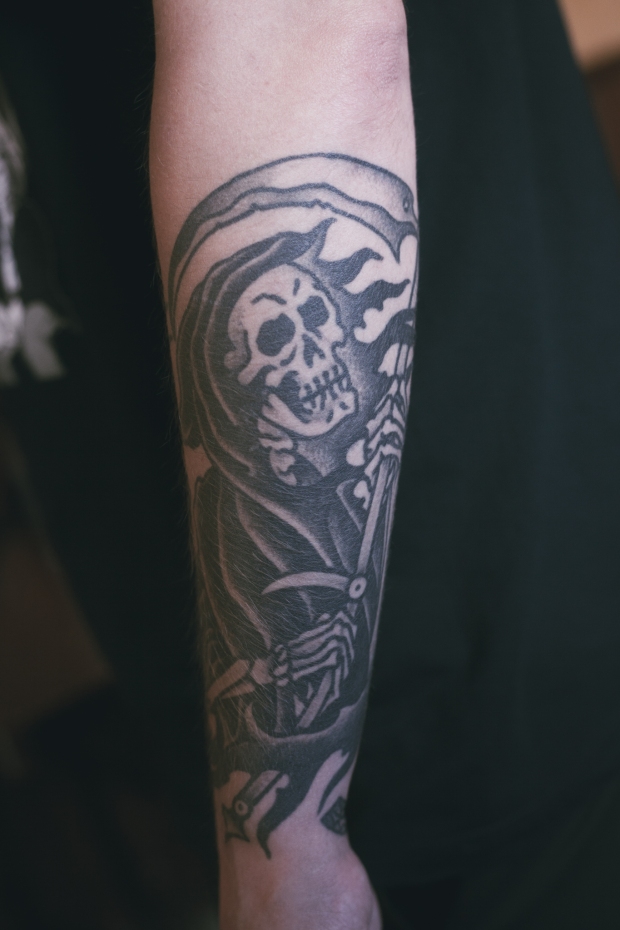 My second reaper tattoo is made by Jarva. I’m very pleased with this piece.

The drunken armadillo is an inside joke. Jarva told me this was the second armadillo tattoo he had ever made, and the first armadillo happened to be a drunken one as well. Pohjalla is the name of our music group.

I’m interested in tattoo traditions and the fact that certain tattoo styles can look good on skin decade after decade. A rose, for example, is a traditional tattoo theme and always looks great on the skin. In general, I like classical tattoo themes and traditional style, even though my own tattoos don’t have to be pure old school.

My personal preference is to keep my tattoos black and grey. Even though I like color tattoos, too, they aren’t really my thing. I also appreciate proper, bold lines on tattoos. Bold will fuckin’ hold!

My right arm is dedicated to traditional themes, and my left arm is concentrated more on themes from Viking and Finnish mythologies. The whole Viking and paganism theme is above all meant to honor my own roots. The ancient Finnish culture and Vikings have a lot in common, people have beat each other up in here as much as the Vikings did. Both cultures also have visually wonderful imagery, all these runes, hammers and so on. 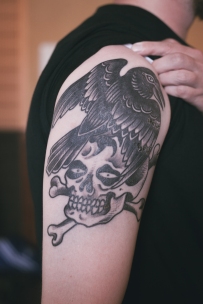 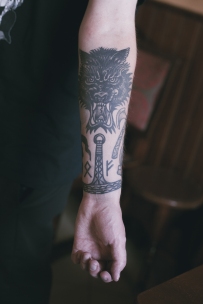 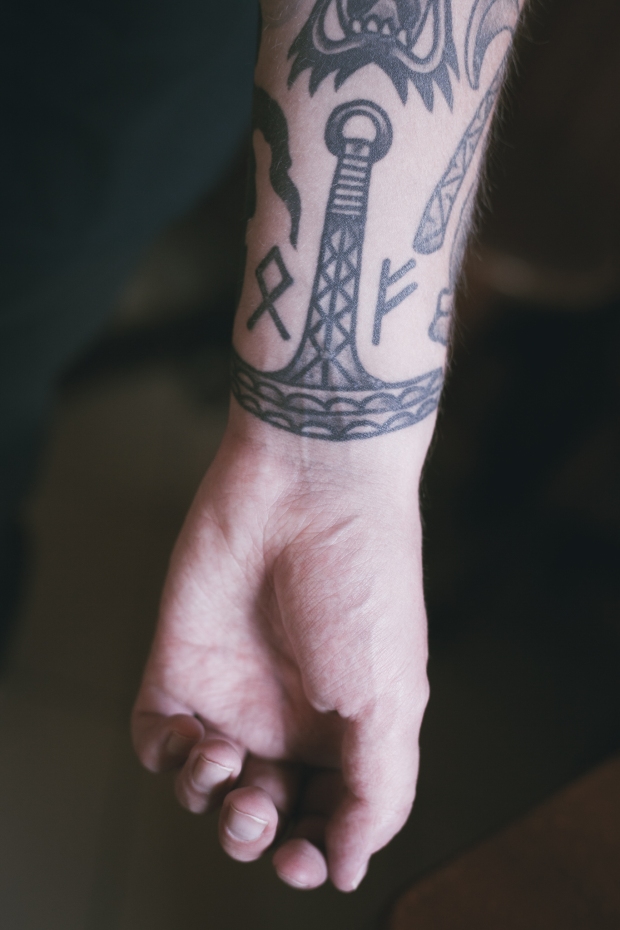 Ukko’s hammer is an old and powerful Finnish symbol.

I’m not a religious person, and even though I support the idea of personal freedom of religion, I’m against all kinds of organized religion systems. Especially when they start to give orders and commit evil in the name of religion. 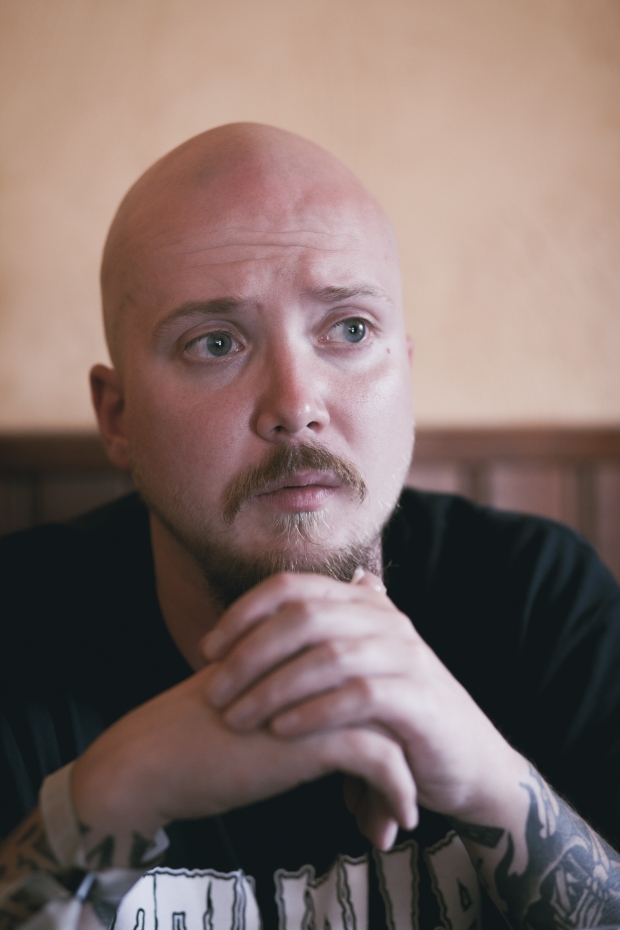 ”Non serviam” is Latin and roughly translates to “I will not serve”. It has been used in many occasions during the centuries, but originally the phrase was meant to express one’s rejection of religion. According to my understanding,  in the Middle Ages people could even be sentenced to death for using the phrase.

A metal band called Rotting Christ also has an album entitled Non Serviam. When this tattoo was being made, my tattoo artist just said well, here we are, tattooing a black metal piece on a rapper’s skin!

Some of my tattoos are plain fillers. The raven skull, for example, just suited well on this spot. Of course the raven is also associated with death in the same way as black roses, reapers, skulls and so on.

The skull and dagger is also a classical tattoo theme and looked good on here. The dagger is designed after a particular seax knife used by Vikings. People have used a seax-like knife in Finland, too. I consider myself a bit of weaponry and knife nerd, so it was important for me to include a real, recognizable weapon in the tattoo.

Basically, I think it’s a good thing that I started getting more tattoos after I had grown up a bit. At this point, I’ve already developed my taste and I know what kind of tattoos I like to have on my skin. My intention is to get full-sleeves, and I’m also going to get my legs tattooed in the near future. At some point, I want to get a traditional ship tattoo on my inner bicep. After my sleeves are ready, I’m probably going to get my chest tattooed as well.

I try to get tattoos in places that I can cover with long-sleeved shirt and trousers if necessary, but otherwise I guess my skin will be somewhat fully covered with tattoos in the future. Jarva also has some old, original tattoo flashes, and I dream of getting some of those designs on my skin as well. Imagine an old, authentic flash from the ’30s or ’40s, wouldn’t that make a real old-school badass tattoo! 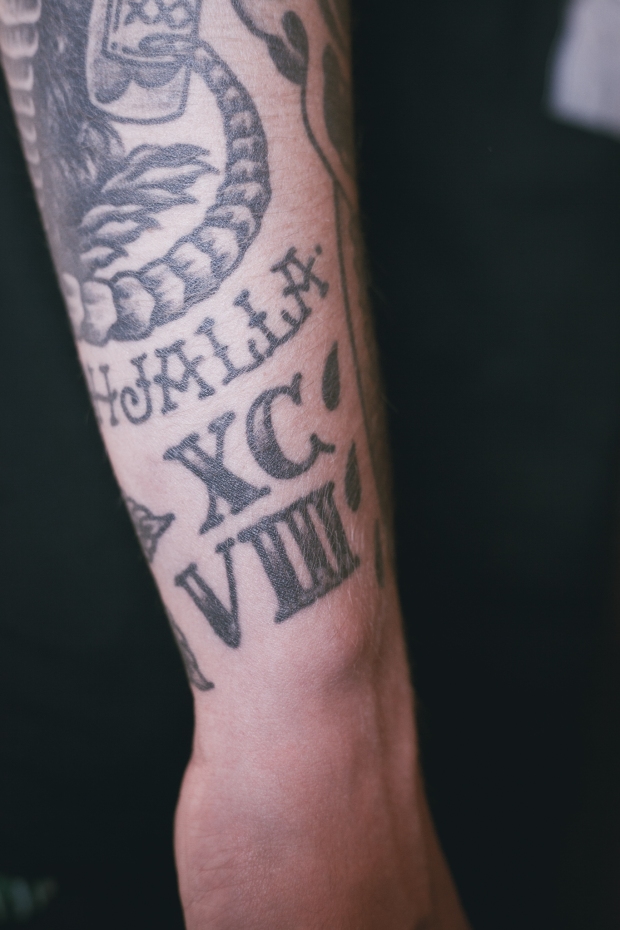 I’m from Vuosaari, East Helsinki. 00980 is the postal code of Vuosaari, so the 98 written in Roman numerals is about the loyalty for my own hoods.

I also have this little souvenir on my foot. My workmates and I were on a holiday trip in Tallinn, Estonia, and while we were sitting on a bar terrace, my coworker and I started joking that we should get some tattoos during the trip. After a couple of drinks, we thought well, why not!

The tattoo shop was a real tourist trap, and they weren’t interested at all about the condition of their customers. At first, the tattooist tried to scam us Finnish tourists and asked 200 euros for this tattoo. In the end, I paid maybe 40 euros for this. It was also the only time when I fell asleep during tattooing – I guess I was so well hydrated. 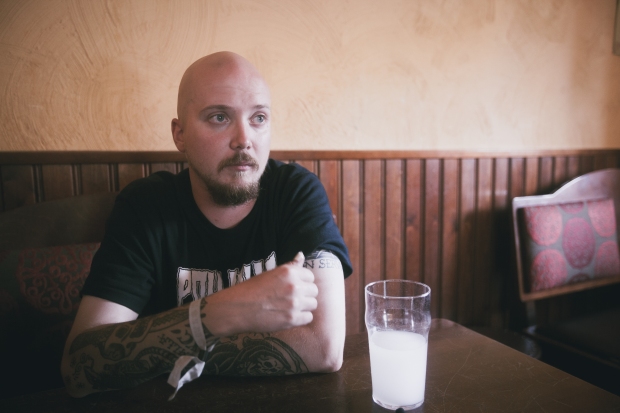 I’m not interested in what people might think about my tattoos. All my tattoos are meant for me and myself only. I currently have a day job as a practical nurse specialized in patients with drug abuse and psychiatric problems, and I constantly see tattooed patients, tattooed nurses and even doctors with tattooed full-sleeves. Whether I have tattoos or not has zero effect on my working skills. There are two people in the world who have the right to decide what I have on my skin: me and my tattoo artist.

Once, when I was still studying, my friend and I were talking about tattoos and one nursing teacher came to tell us that getting tattoos should be avoided because they might scare people. I just told her that if she has such an attitude towards tattooed people, it’s her personal hell, not ours. If tattoos make you feel anxious, maybe you should consider participating in some course or getting a nice, new hobby. It might just bring you something else to think about.

Hand poke tattoo is made by Joni from Red & White Ink (link). My music group and I had a gig in Oulu in the spring, and my bandmate Sairas T got tattooed by Joni. It looked like such a cool work that I decided to get tattooed on the same technique. 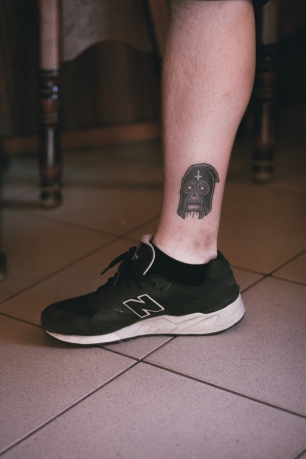 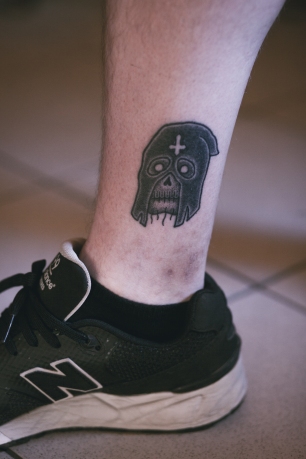 Hand poke is a pleasant tattoo technique and heals fast, too. In addition to Jarva, Joni is the other artist whose artwork I really appreciate. I think he’s very good at his work and I also appreciate his enthusiasm towards the hand poke technique.

I know that some people like to collect tattoos from different tattoo artists, but I like to stick to a unified style and trust artists that I’m familiar with. I follow a couple of foreign artists on Instagram, though, mostly German tattooers. Even though the former Finnish athlete, Seppo Räty, said that Germany is a shitty country, I surely would get myself tattooed there!

Sometimes it feels that people think tattoos should always have some damn deep meaning and background story. I don’t know if it’s because of these tattoo shows like Miami Ink and such. I think the most important thing about tattoos isn’t their meaning, it’s the fact that you like it yourself and it goes well with your own style.

For me, tattoos are most of all a personal business. I also see the pain as a part of the process, and tattooing isn’t even supposed to feel like some gentle tickling. When you have first sat through the whole tattooing session that has maybe lasted for hours, you really learn to appreciate the result as well. I think my tattoo artist put it well as he said that tattoos are a collecting hobby that lasts for a lifetime. 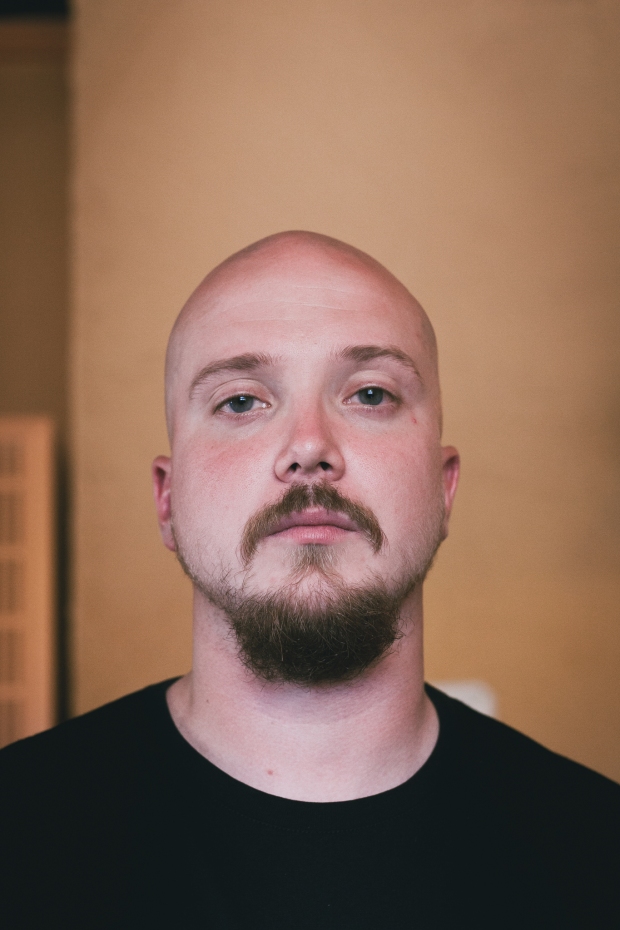