I was 18 years old when I got my first tattoo. I wanted to have something quite small, so I took this little image on my wrist. It’s from the solo album of a Japanese artist called Hyde. He’s also the vocalist of a Japanese rock band, L’Arc~en~Ciel. He said that this album, Roentgen, was like his soul expressed in music. I really felt connected to the idea back then, so I decided to get a tattoo based on the album cover.

I’m 27 years old now, so the tattoo is almost 10 years old. I like it still, as it reminds me of that stage in my life. I’m sort of a geek, and I love Japanese culture, anime and so on. I also studied Japanese for six years, but I guess if I tried to speak Japanese now, I couldn’t remember a word!

My second tattoo is from Hayao Miyazaki’s anime Mononoke Hime. I got this tattoo maybe two years after the first one. This was made in Argentina by Mauricio Sarfati.

This is the spirit of the forest, so for me, this tattoo symbolizes the connection with nature. I’ve always been a city kind of person, but I love animals and feel connected to nature that way. I often feel it’s easier for me to connect with animals than with other humans. 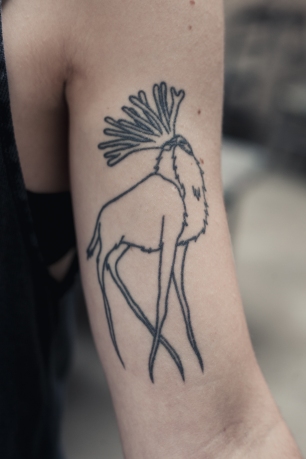 I’m from Argentina, but I’ve been living in London for one and a half years now. I guess the main reason I moved here was that I wanted to get away somehow – you know, to change the scenario. I actually visited London a month before coming to live here and really fell in love with the city. I returned back to Argentina, and maybe 10 days after returning, I booked a ticket back to London to come here to stay.

The bird tattoo was made after I moved here. This reminds me of my home back in Argentina. My parents have a big pool outside their house, and this same kind of bird used to come twice a day to drink water from the pool. Every morning and afternoon, the bird was there. 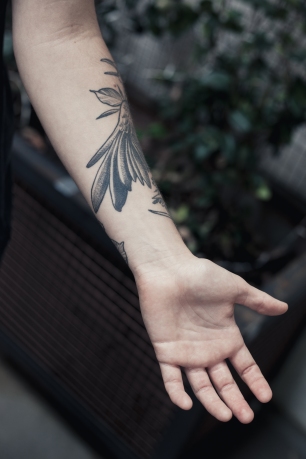 Back in Argentina, I used to live in a city north of Buenos Aires. I felt the society where I was living in didn’t allow me to express myself freely, and I was feeling really oppressed when I lived there. I had a girlfriend in Argentina, and even though we dated for two years, I never told my parents about it.

Here in London, if someone looks bad at you because you’re holding hands with a girl or something like that, it’s just that one person, and most of the people really don’t care. But in Argentina, people are more connected to each other, so you constantly have a feeling you’re being observed. I just think I wasn’t strong enough to deal with it and eventually, I decided to escape all that. 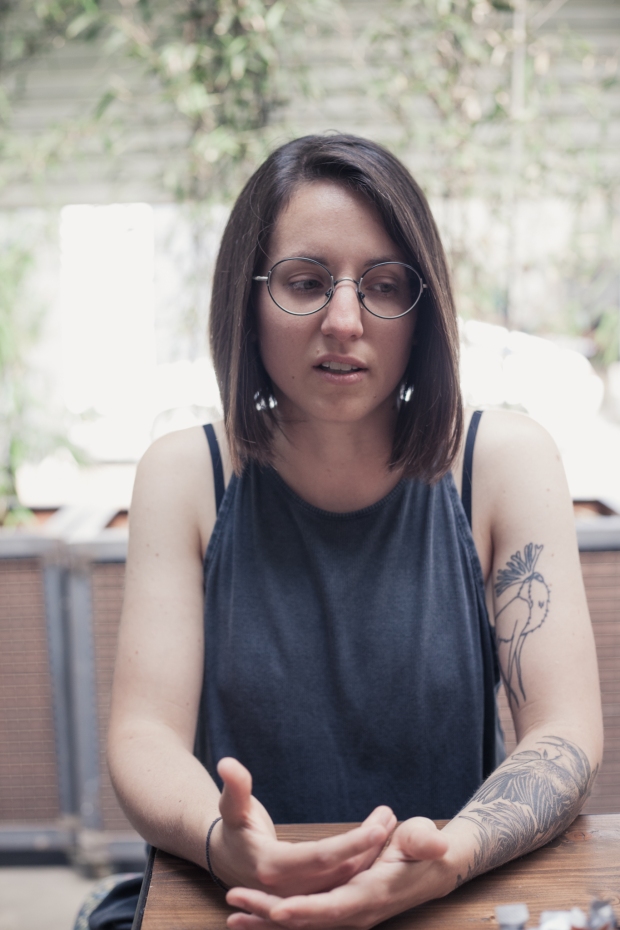 This tattoo on my leg is made by Maxime from Sang Bleu (link). The tattoo related to the oppressed part of myself and it’s made after the engraving called Melencolia I by Albrecht Dürer. The original engraving depicts a depressed angel and an underfed dog. Originally, it was my mom’s therapist who asked me to do an illustration where the angel would be fixed. The therapist is focused on behavioral therapy where the basic idea is to get people to do stuff and forget about all the things in their heads by focusing on something else instead.

For me, this tattoo is a reminder that I’m okay now. When I lived in Argentina, I was in a pretty dark situation and don’t want to return to that state of mind again. It’s better to do stuff and keep yourself busy with the things you like to do. 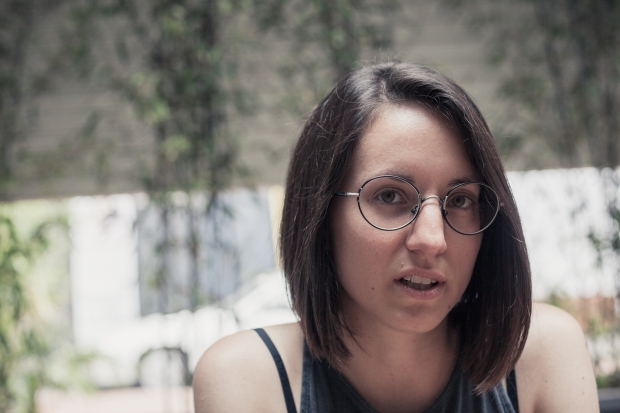 This is the first tattoo I made myself. It doesn’t have such a big meaning than the previous ones. I have recently started tattooing, so I’d say this is maybe three or four months old. Before I started tattooing, I tried to apply for some graphic design jobs, but then I realized I’d rather be a tattooist because it allows me to do my own thing. 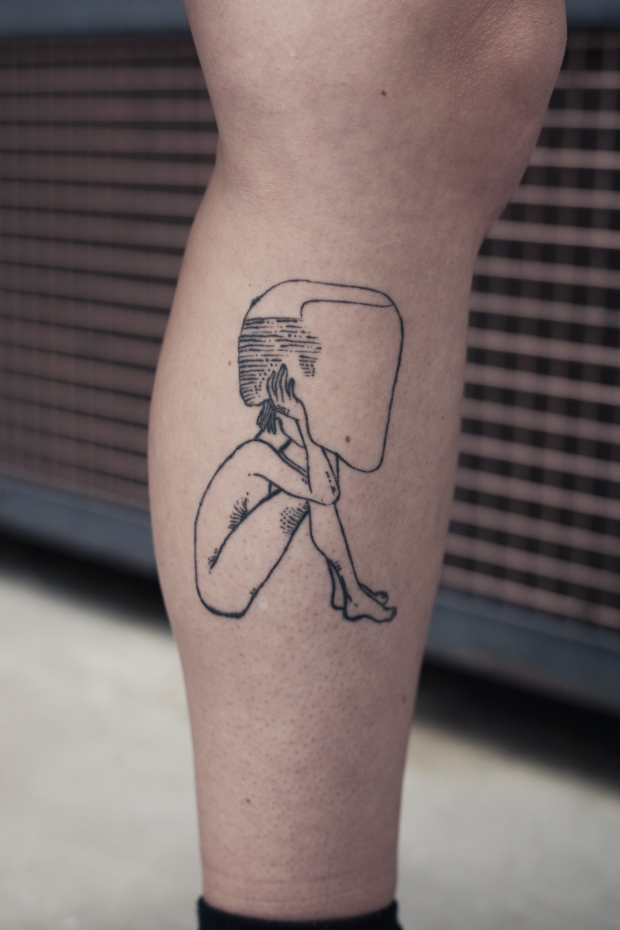 When I do tattoos, I’m able to express all the things that I like, all the weird things as well. I also feel really honoured to get to do it on other people’s skin, as the tattoo will last for their whole lives.

I had an opportunity to become a tattoo apprentice in Argentina as well, but I didn’t accept the offer back then. Later I’ve started thinking that the fact that I didn’t accept the apprenticeship may have been related to my former situation in general. It just didn’t make sense to start tattooing there, because I didn’t feel free at all and just wanted to get out somehow. Nowadays I’m more open and able to be myself.

I think every tattoo is important, because each one reminds you of a different stage in life. I think colors look cool on other people but they’re not for me, so I like to keep my own tattoos blackwork. In the future, I’d like to have a rat tattoo to remind me of London. I’ve never seen so many rats in my life as I have seen in here!

I saw Neon Genesis Evangelion when I was maybe ten years old. I used to watch it when my mum didn’t see. I know she wouldn’t have allowed me to watch it since there’s pretty depressing and weird stuff included. 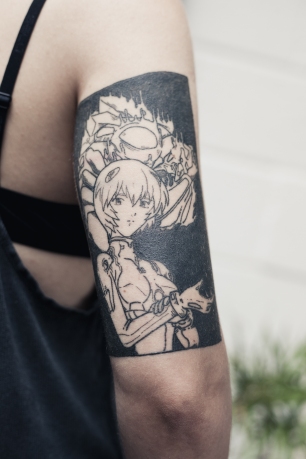 This tattoo is made by Matt Bailey (link). He wanted to do an Evangelion piece, so I asked if he could tattoo me Rei Ayanami who is a central character in the series. Rei has felt herself alone for her whole life and don’t really know how to communicate with other people. I guess I share the same feelings as well, so I wanted to get a tattoo about her.

Nowadays I have a girlfriend, and we’re living together. This small picture is the first and only tattoo made by her. We’ve been together since I came here but have known each other already when I lived in Argentina. She’s a graphic designer. Originally, she came to study in Argentina and we became friends there. 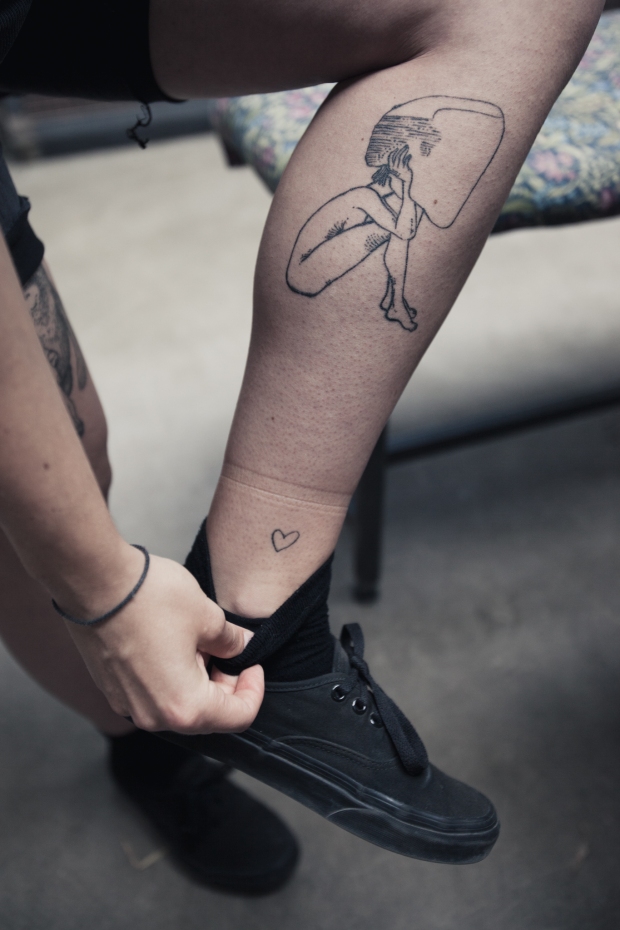 My parents know I’m attracted to girls. I told them when I still lived in Argentina. My brother is also gay, and I guess the hardest thing for my parents has been that they really thought they’d have biological grandchildren one day. They had to process it a lot and they still are, but these days they’re pretty fine with it. They’re really making an effort to understand, which I appreciate.

I really like living in London, and I think this is a good place to develop my career and be happy in general. Even though I don’t see myself growing old in here, I’m staying for now and enjoying my time.

I think the situation in Argentina is improving as well and has actually improved quite a lot recently. Last time I visited there, I noticed that I didn’t have the same feeling of being observed that I used to have when I lived there. Or maybe it was just because I didn’t care anymore. Now I feel free to be myself.