I used to be a punk kid when I was young, with a mohawk and all. I guess my first tattoos were some sort of rebellion, too. When I was young, my father always said to me I shouldn’t get any tattoos. He had made tattoos with his friends in his younger years while being drunk and regretted them afterwards, and he didn’t want me to make the same mistake.

I think I was only 16 years old when I tried to get tattooed for the first time. I had a permission and everything, but then I got arrested a little before my tattoos were supposed to be made. We used to be juvenile delinquents when we were kids, my friends and I. Finally, I got the tattoos when Mikko from Tramp’s Tattoo tattooed these barbed wires on my wrists.

After my first tattoos, things went little bit out of control, and I began to have more at a fast pace. I wanted even my first tattoos to be somewhere where they could be easily seen – to show that we’re not playing around here. After I got my face tattooed, it didn’t matter anymore where I would have my next tattoos. At that point, I was already stigmatized, in every way. But it doesn’t bother me at all. I am what I am.

I got my face tattooed maybe 15 years ago. During that time, there were not as many people with facial tattoos as there are nowadays. 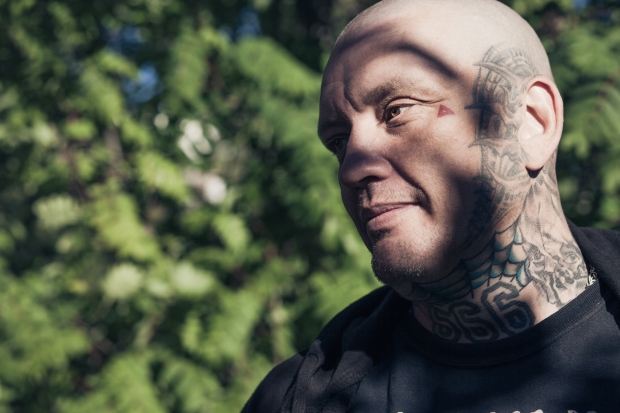 I’ve heard negative feedback concerning my facial tattoo twice. The first time was when I was sitting on a terrace, and some woman started shouting at me that I have something in my face. The second time was years ago at a metal music festival where Carcass and Macabre were playing. There some guy started whining to me about my tattoos. I told him to think twice before talking some bullshit like that. If you’re so concerned about other people’s looks, you could at least learn to keep your mouth shut. 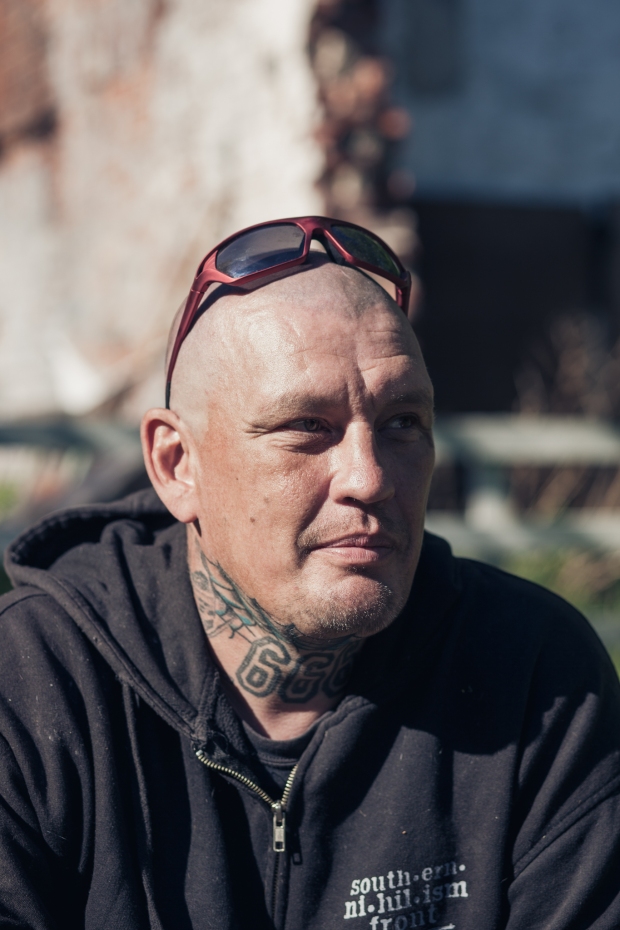 If you compare to the situation ten years ago, it’s a different thing to have tattoos nowadays. It used to be quite hardcore stuff to have your face tattooed, for example, but today there are many people with large and visible tattoos. If I see someone with many tattoos, I can’t think hey, this must be a certain type of person. Mainly I just think he or she must’ve had some guts to get tattooed.

I find it important to choose my tattooist carefully. Mika from Red & White Ink has made many of my tattoos. I wouldn’t get tattooed by a person I don’t really know.

Joni from Red & White Ink has made this tattoo on my hand and the red warning triangle under my eye. 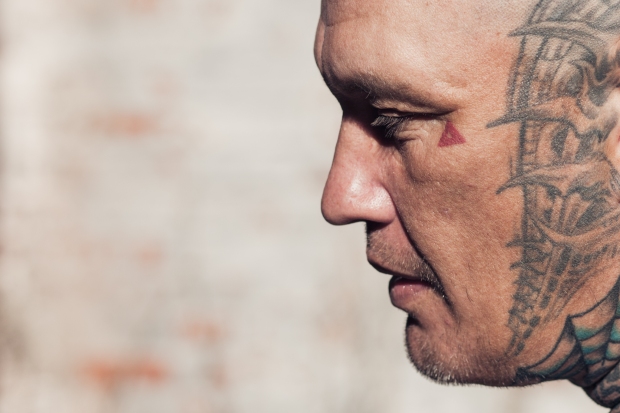 I have a 22-year old daughter. When she was 16 years old, I asked her if she wanted me to pay her a piercing or a tattoo as a birthday present. She just said dad, you have so many tattoos already that I guess I don’t need to have any. I think it’s kind of great she said that. Tattoos are a personal choice, and I find it nice that you have the opportunity to get or not get yourself pierced or tattooed. This is a free world, for now, at least.

I appreciate different kind of people, and I’ve never been a racist, homophobic or anything like that. I really don’t care about other people’s business – I think it’s good to have different kind of people around. Still, our society seems to think more and more that you have no right to be different, and different people should be crucified. All the time we’re getting to a more fucked-up direction.

This society tries to decide for our lives so that if you’re different from the others, they will try to put you down – so that you wouldn’t cause any trouble to the so-called normal people.

I was born in Gävle, Sweden, and as a kid, I used to live in the same kind of neighborhood as this, where they put all the foreigners, alcoholics and so on. It’s good to live here. When you go to a market to buy potatoes, people always say hi to you. We’re all together in this same suburb.

I’ve mainly raised myself and never had someone to look up to. Nihilism has been my view of life. 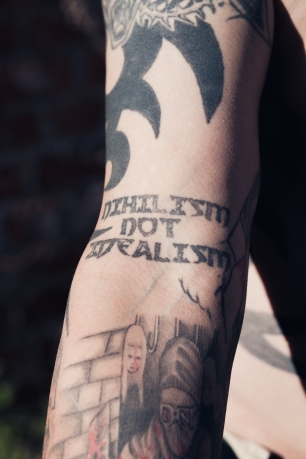 Currently, I have three different band projects going on, and we’ve made an album with two of them. For me, music is a channel to let off my frustration and hatred. When I shout in my band Kusipää, it helps me relieve my own aggression at the same time. I’m also a part of a music project called Contortus, which is quite different stuff. There are no actual instruments, and the music is constructed from noise recorded from construction sites and places like that, and I just shout the vocals on that noise. It can’t be labeled as hardcore and maybe not even music, but more as a way of unleashing energy. You really don’t make money with this music stuff, but it’s a good way to express yourself and filtrate your own aggression.

I guess Stay Away is based on my youth as a punk kid. On my ring finger, there’s my wife’s name, Miitta, tattooed. We’ve been together for eight years and married for five years. I got her name tattooed when we were engaged, and this skull when we got married. These are probably the only tattoos that have a personal and important meaning for me. 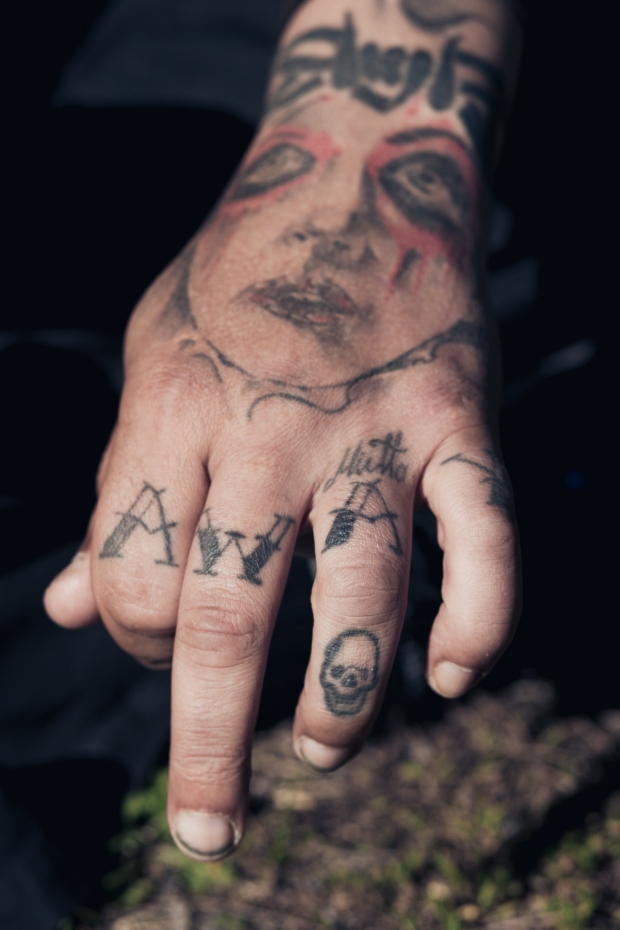 When I was little, my grandmother joined the Pentecostal church. My mother told her immediately there’s no chance she would convert us children and banned her from our home. 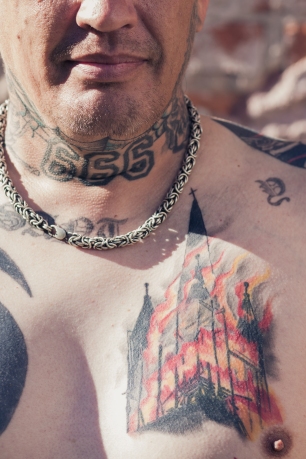 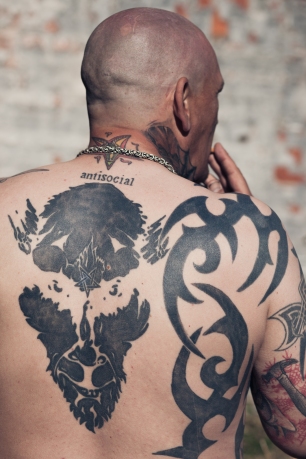 For me, the Pentecostals, Church of Satan and all the groups like that serve just one purpose of gathering money from their members. These tattoos are basically a middle finger against the whole religion system that is still prevalent in the society.

Nowadays I don’t think of myself as such a freak as I used to. Earlier, I felt like I was just a stranger and an outcast, but during the years I’ve started to realize that maybe that’s not the whole truth. That maybe, eventually, I’m not the one who’s wrong, but maybe it’s those others that have been wrong in the first place.

I know in some people’s eyes, we tattooed people will always be some sort of second-class citizens. There’s no fucking question about it. I was educated as a construction painter, and for many years I thought I won’t even bother to go and ask for a job anymore. If I did, it always felt like there was some officer who would look at my tattoos and say not today – let’s see again in a couple of years. I don’t know whether it was actually true or not, but I’ve always had that feeling.

A while ago, an elder lady told me something that really came for me as a surprise. I was just chatting with her about work, and suddenly she said to me you know, it’s not your tattoos that define you as a worker. The way you look has nothing to do with your professional skills, and tattoos tell nothing about how good you are at your job. I guess it was the first time I heard someone saying that out loud. It actually felt quite okay to hear it. A pretty good feeling, to be honest. 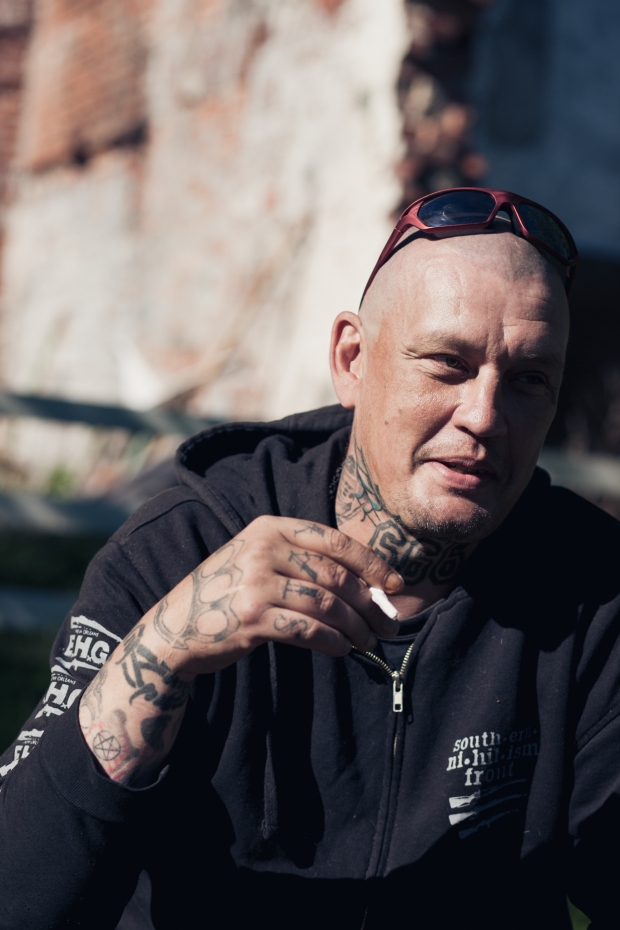