My name is Tiina and I’m 36 years old. I’ve been getting new tattoos as good ideas have come into my mind – or, sometimes, not-so-good ideas. All my tattoos remind me of something that is dear to me.

I was 19 years old when I got my first tattoo on my shoulder. It was a pretty radical experience, and I fainted a couple of times during tattooing. Ever since I was a kid, I’ve been told my eyes are like stars, so a star seemed like a good idea for a tattoo. After my first tattoo, I had a couple of years’ break, and I’ve been gradually collecting new ink on my skin after that. I have three kids, and I must say that after having children it’s been far easier to tolerate the pain compared to the time when I had my first tattoo. Nowadays I can easily spend, say, seven hours on a tattoo chair. 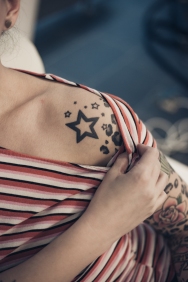 My arms have become filled with new tattoos little by little. For some reason I’ve been collecting tattoos especially on my left arm. The cupcakes came first, since I love baking and often bake cupcakes. The diamond tattoo is on my skin simply because I love all things shiny. The leopard pattern and stars are mainly just fillers. I’ve always loved leopard printed stuff, although my friends have told me animal prints are something only ladies over 60 years should wear, haha! I love the animal prints nevertheless, and now I can carry leopard pattern always with me. 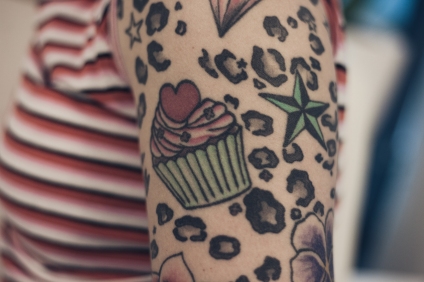 The violet flower is a memorial tattoo for my late godmother, since a violet was her favorite flower. She was a true fighter by nature. I also have my mom’s favorite flowers, roses, tattooed here.

I also have here lollipops, the initials of my two oldest children, and of course a tattoo for my youngest daughter, Melissa. We used to call her Mimmi when she was little. There are many other tattoos here also, fillers and other stuff. I used to work as a pin-up model in the past, so the high heels and lipstick tattoo remind me of that time. The idea for the rainbow came from the fact that I love traveling together with my friends and our children. As we often might have five to eight children with us, we sometimes wonder if other people think we are a one, big LGBT family, and these are our common children. 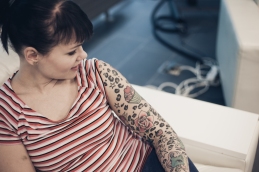 The text tattoo was made when I was in Lanzarote with my ex-boyfriend. This tattoo reminds me that even if the target of love would change over time, yet there will always be love. That’s what life is all about – love comes, love goes.

I’ve been working as a clothing sales consultant for over ten years now, and the pink cloud was one of the first patterns that I sold when I first started my job. The umbrella is actually meant to be a sunshade. 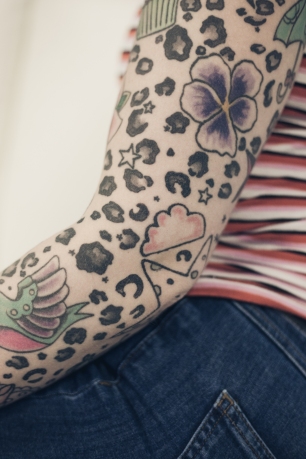 When I was little, I used to be an elegant little lady. Once I was at our summer cottage with my grandmother, and we decided to visit a camping area nearby. I had my little sunshade with me, and I was dressed to the nines. Just when we were buying ice cream on the counter, an airplane flew over us. The sound of the plane frightened me off, and I cried out to my grandmother “Oh shit, I was startled by that buzzing sound!” So, that’s how elegant I really was! This tattoo reminds me of both the particular event and the summer vacations at our summer cottage in general. When I look at this tattoo, I can always remember the scent of a dry pine tree forest and the feeling you get when you walk on the forest path and hear the dry pine needles cracking under your feet.

Even though I left pin-up modeling in 2013, I still love to dress in an original style. I love pencil skirts, swing dresses, and all the old school stuff mixed with the modern style. I also have my own summer car, a Peugeot from the ‘60s. Still, I can’t imagine myself in the role of a 1950s housewife. I guess I’ll always have that little lady who occasionally says oh shit! inside me. One of my customers once told me that I resemble the woman in the “We can do it!” poster, and so she gave me a keychain based on the poster. I admit that I relate to that spirit and a way of thinking. I’m currently a single mom, and even though I have a boyfriend, we don’t live together. So, I’m in charge of my home, business, children, pets and everything else by myself. I’ve got this under control. 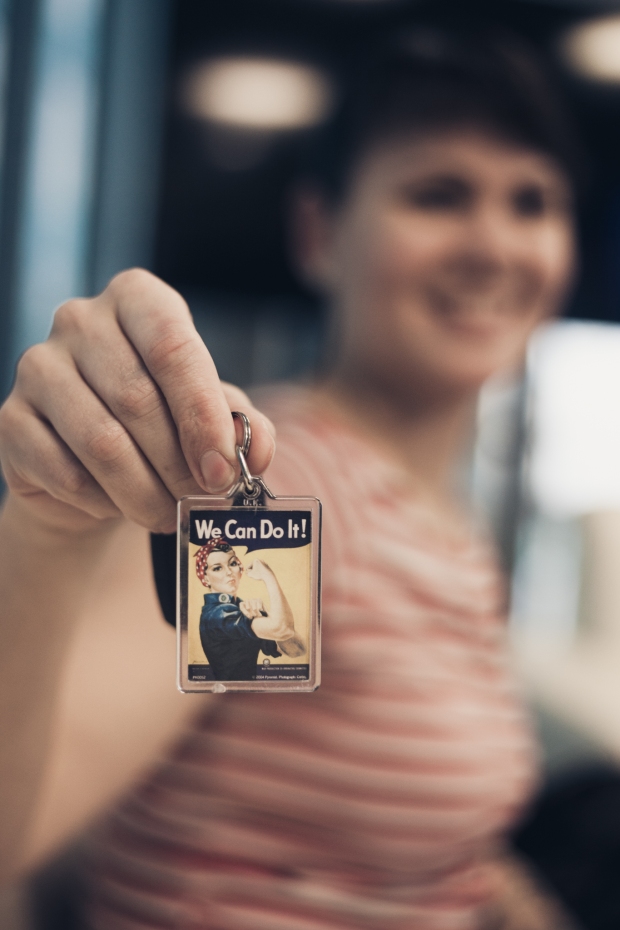 On my neck, I have a bow tie tattoo that I got with a gift card from my ex-boyfriend. On my back, I have a tattoo of my late chihuahua, Speedy. He was a tough cookie. He lived for 12 years and only had one eye because the other was damaged by another dog’s bite. He had a cataract in his only eye, a heart disease, and patellar dislocation – everything you could imagine. He was the kind of a dog who literally went through everything: if something fell off the table, he surely was there and got hit by it. And still, he just carried on living. In the end, I could no longer watch his suffering and I had to make the final decision. Now I will always carry a memory of him here in my left shoulder blade, on the same side where my heart is. 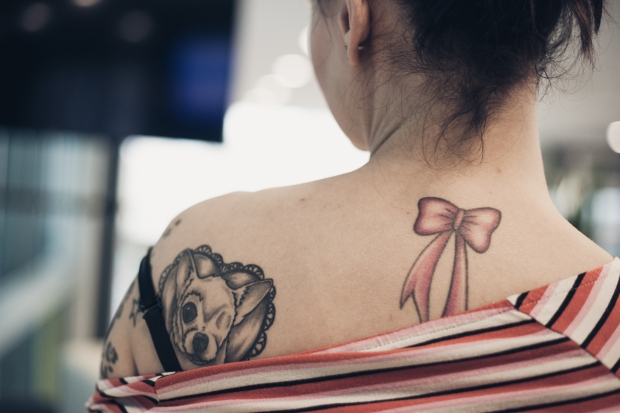 The complementary colors of the birds represent my two oldest children. I’ve been thinking many times that I should fix this ankle tattoo a little, maybe by adding some roses in it or something. But then again – the tattoo felt like a good idea at the very moment, and if I had it covered up, the memory might get covered beneath it as well. 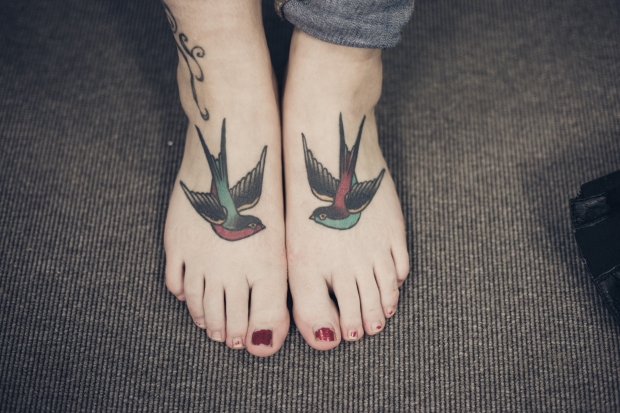 I have a tattoo of a pink bream on my left ankle. My friend has the same tattoo, and another friend of ours has a blue bream tattooed on his skin. I still don’t know where the whole idea came from, or why the bream had to be pink in the first place. I guess it was just a spur-of-the-moment kind of thing. We’ve been thinking afterwards that maybe we should continue the same theme by tattooing all the other Finnish fish species on our skin. Eels, vendace, perch… you name it! 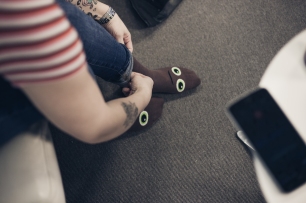 I don’t even know what made me have more tattoos, since my first tattoo was such a radical experience. I guess I’m just a bit crazy. Or maybe it is the same thing as in life in general – when you go through hard times, you still shouldn’t give up.

I usually wear a long-sleeved shirt at work, especially when I know I will have elderly people as my customers. Many of my regular customers still don’t know I have this many tattoos. In summer, I sometimes choose to wear a T-shirt instead, and that’s when people actually make compliments of my tattoos and start asking about their meaning. Although nobody has yet hurt their feelings because of my tattoos, I still tend to think it’s better to hide them at work.

Even though I think tattoos are an inseparable part of me, I still hope that people wouldn’t form their opinions of my personality based on just the fact that I’m tattooed. I guess it’s just that in some level, people always want to be accepted. Even if I don’t ask for anybody’s acceptance when I get new tattoos, I still want people to see me, not just my tattoos.