The idea for my thigh tattoo came simply due the fact that I like Matryoska dolls. So, I don’t have any Russian lineage, as many people might think. When I was a little kid, my grandmother collected Matryoska dolls, and I always wanted to play with them while visiting her. I just thought they were so nice, as when you opened one doll you always found a smaller one, and then smaller and smaller… Just like some kind of layers.

Still, I didn’t want to tattoo a traditional Matryoska doll, but wanted to add something of my own in it instead. I’ve grown up by the sea, so I wanted the sea theme to be included in the tattoo somehow. At first I thought about adding a ship window through which you could see the ocean, but the tattoo artist reckoned it would be better to decorate it in some other way. So I gave free hands to the artist, as long as the tattoo would include a Matryoska doll, sea and colours. 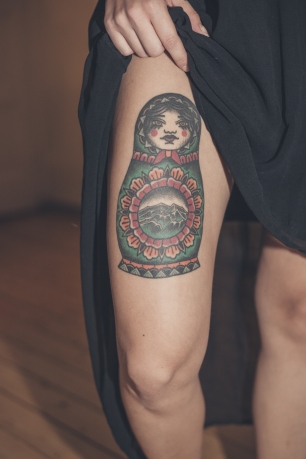 I wanted to have the tattoo on my thigh since it’s an easy place to hide, and at some point I’m going to have more tattoos on my thigh as well. This was made in January 2017 – and it hurt! It took about five hours and 45 minutes, and for the last 45 minutes I just thought I couldn’t survive for a minute longer. Somehow I thought the outer thigh would have hurt more, but in reality, the inner thigh was much worse. A friend from work told me that a big nerve passes down inside of the thigh, so for example giving birth feels in your thighs too – and it seems that the pain also goes the other way around, I can tell! I could feel it in my hips that my thigh was being tattooed. Compared to that, the arm tattoo was so easy, and I actually fell asleep while it was being made.

The deer – or, as somebody once said, the galaxy reindeer – is a cover up tattoo I got in late summer. My relatives have reindeer and my family is from Pudasjärvi, where there’s a reasonable amount of reindeer, so it felt very natural to tattoo some kind of antlered animal on my skin. Plus, if I quickly have to make up some story for this tattoo, I can always tell it’s a Capricorn, since my astrological sign is Capricorn. A cover story for a cover up tattoo!

You can still see the old bowtie tattoo underneath, so I think a little more ink should be added there. And that other bowtie is going to get covered up as well. Foolish little pictures taken by a foolish 18-year-old me, haha! I have never regretted them, nor have they bothered me, I just want them to be covered up because they are so difficult to combine with anything. I’d rather get a bigger tattoo on them than try to create something around them.

I wanted to have a tattoo that would continue further above my elbow, and now those antlers reach there. In my opinion, the body parts matter when getting a tattoo, and even though forearm and upper arm can be considered as two separate parts, I didn’t want my elbow to be the dividing factor, but to extend the image over two parts instead. I like geometric and graphic patterns such as triangles, so I wanted to crop the deer so that it comes out of the triangular shape. And since I’m from Northern Finland, I wanted the northern lights to be included there somehow as well, so they ended up – by artist’s freedom! – forming this galaxy-like artwork that I love so much. This was made by Jone from Putka in Tampere, he handled the job so well.

And then, of course, I have this little cross on my thumb. I got this four or five years ago. I’m not a religious person of any sort, I don’t belong to church nor believe in God, but there are certain values in Christianity that I can agree on. Those basic moral values like treat others as you would want to be treated, respect others, don’t steal, don’t kill…

If I fold my hands and cross my fingers, this tattoo appears on top. Of course, when I look at this from my own point of view, the cross appears to be upside down. Balance! It’s funny that this tattoo has remained so good-looking, even though as a hairdresser I have to wash my hands all the time. When I had this tattoo, the tattoo artist said that this would have to be redone every year. But this still remains good after five years.

I love art, and for me tattoos represent most of all a form of art. Even though almost everyone has some kind of images on their skin nowadays, decorating yourself with tattoos still makes you personal. I want my tattoos to have some consistent idea so that they would interact with each other – or, that at least they wouldn’t fight with each other, by style or by color. In the future I’d like to have a unified, colorful sleeve that would match with my other arm as well. My thigh tattoo and arm tattoo are of different style, but on the other hand, they are rarely seen at the same time, so it doesn’t matter that much. I’d still like to have semi-matching tattoos in my both arms, since they are usually visible at the same time. Somehow I cannot imagine tattoos to be something that should be regretted or pitied over afterwards. For me it’s quite the same thing as a birthmark or a mole on your skin: there it is, you can cover it if you want to, you can have it removed if you want to, but why should you feel any regret?

I find it funny when some people always ask the same questions like “But why did you have to tattoo your thigh? Doesn’t it look terrible when you’re old and wrinkled?” Hey, when I’m old and wrinkled, I guess my thigh doesn’t look any better with or without the tattoo! Or when people say “If you cover your body with tattoos now, will they look good anymore when you grow older?” Well, when I grow older, I probably won’t be exhibiting my body around, as I’m not into it at the present time. It’s not like I would go out there hanging around in bikinis to show off my body or my tattoos. If I like them myself and my spouse likes them as well, then I think it’s no one else’s concern.