At first I thought that I don’t have any stories behind my tattoos. That there would be nothing to tell. But when I really started to think about it I realised that there are actually quite many things I could tell about my tattoos.

My first tattoo ever is a rose on my shoulder. I have drawn it myself and had it made as one of the first things after I turned 18. It doesn’t have a bigger meaning, it’s just a rose. At that time I thought that it might be an easy picture to start with, because after all I knew I was going to have a lot of tattoos anyway and probably a half-sleeve starting from there. The funniest part is that when my dad first noticed it he said to me: “Wow. Now you’re just like everyone else. Not special at all.” He said it with a lot of disappointment in his voice. My dad has always been against of all kinds of body modifications but after over 10 years he’s starting to get used to them.

Quickly after my first tattoo, I wanted to get more on a fast pace. Nowadays I wish I had been more patient with getting new tattoos but hey, when you’re young and stupid you want to get everything at once. At that time I also thought that I would only get tattoos that are black and white, and that’s why I have so many shitty grayscale flowers on my arm. And because of the pace, I didn’t have the time to think about something so “stupid” like a meaning for the tattoos… Or to look for a good tattoo artist. Basically, the only thing I was thinking was: “Just shut up and take my money!”

After a few years of suffering I wanted to get those horribly made tattoos fixed, and because I had already been dreaming of getting a half-sleeve, I decided to combine these two ideas. As a result of that, I got these two beautifully made tattoos on my arm: a blackbird and a wolf. The blackbird tattoo is meaningful to me. Back then I had moved from northern Finland to the Uusimaa region and I wanted to celebrate it somehow.  And because the blackbird is regarded as “The bird of Uusimaa” it was chosen as the subject of the tattoo. The wolf was an idea that came from the tattoo artist after we had spoken about how I love Finnish nature, its plants and animals. Both of the tattoos are designed and made by the same artist, and she also fixed the old tattoos. This was the first time I had colours in my tattoos, and I couldn’t be happier.

The tattoo on my left ring finger is a typical “love tattoo” with my ex-boyfriend and, of course, he has a matching pair for it. Actually, we have two matching tattoos: the hearts on our fingers and the flowers on our necks. The funny thing is that when we were getting those hearts tattooed we were joking to each other like “hey, if we ever break up we can just cut our fingers off or get rid of the tattoos with a cheese slicer!” As far as I know, both of us still have the tattoos and our fingers intact. Those tattoos have good memories behind them and after all, I’m on good terms with my ex nowadays.

The tattoo on my left thigh is the biggest one at the moment. It was actually meant to be colored but even the linework was so painful to me that I don’t have the courage to get it coloured, at least not yet. The memory of the pain is still too vivid on my mind, haha. The tattoo is also drawn by me with an extra touch of the tattoo artist. This is one of the few tattoos that actually has a planned meaning behind it; it is some kind of manifest of my love for cats. Many have asked me: “if you love cats why would you get a tattoo of a cat skull on yourself?” But why not? Cats are beautiful both inside and outside, if you ask me.

Then there’s this mandala tattoo on my leg. It was an unplanned walk-in tattoo. There’s nothing much to say about it – I always forget that it even exists.   One of my friends had a chance to be a tattoo apprentice at a well-known shop in Helsinki, and after a while she wanted to test her tattoo skills on me. And after saying yes to her wish, I soon noticed that I had a butterfly flying on my foot. It was an awfully painful place to get a tattoo, but I love the result nevertheless. 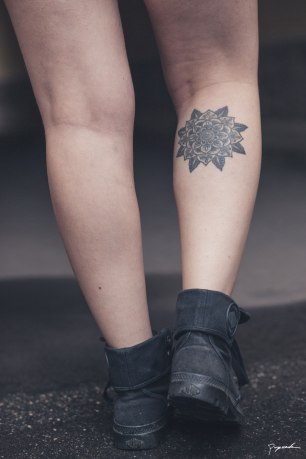 Sometimes when I feel bad about having used basically every penny of my savings on tattoos and other body modifications, I just look myself in the mirror and think about how cool a granny I will make in the future. As you can see, I haven’t even been that rich ever in my life, since I’m not covered with tattoos, only having a couple of tattoos here and there over my body. And after all, I guess there are much worse ways to use your money anyway.

After a long and hard thinking, we have decided to end this project. We want to thank you all, our followers and readers and especially the amazing humans who have been sharing their intimate stories during the years! We hope you are having an amazing new decade coming up. Get tattoos and be fabulous! Sincerely, Pinja, Mervi & Elsa #thankyou
"Olen viimeiset pari vuotta etsinyt erilaisia tapoja määrittää itseäni ja kokeillut elää erilaisissa rooleissa yhteiskunnassa. Olen päätynyt siihen, että olen onnellisimmillani jos ei tarvitse lokeroida itseään ja saa elää mahdollisimman vapaasti ilman turhia oletuksia tai lokeroita. Käytän kyllä sosiaalista miehen roolia, olen poikaystävä, mutta sekin on vain siinä tapauksessa, että pitää valita kahdesta. Koen olevani enemmän maskuliinisella puolella, mutta en ole täysin janan kummassakaan päässä. Suomen kielessä on onneksi helppoa, kun voi olla vain ”hän”. - Juno Junon tarina löytyy nyt suomeksi, bion linkin takaa! 🇫🇮 #hwtstories #hwtsuomeksi #tatuoidut #tatuointitarinat #eilokeroitavissa #hän #maskuliinisuus #feminiinisyys
"Usually the ideas and concepts just pop into my head and I don’t bother to think where they came from or why. But for this one on my stomach I got an idea from the movie Spirited Away from a scene where the main character is turning invisible. The other character takes hold of their hand and the main character starts turning visible again. I think it’s a beautiful scene and there is some symbolic meaning I can’t quite explain. There is certain sensitivity in that and the tattoo." - Juno New story! Thank you so much Juno for being part in our project! ✨ #hwtstories #spiritedaway #theythem #identity #tattoos #tattooed #design #drawing #blackandwhitetattoo
"Olen introvertti ihminen, ja asiakaspalvelutyöhön sisältyvä sosiaalisuus on vaatinut minulta paljon harjoittelua. Lisäksi ihmiset tuntuvat ajattelevan usein, että koska näytän tältä, olen ihmisenäkin tietynlainen. Kerran töissä työkaverini totesi, etten ole yhtään sellainen miltä näytän. Hän sanoi sen ihan positiivisesti, ja hetken aikaa mietittyäni totesin, että tuo on varmaan ihan totta. Vaikka näytän tältä ja saatan sen vuoksi vaikuttaa ihmisenä jotenkin kovalta, olen pohjimmiltani ihan herkkis." - Jenni-Reetan Jenni-Reetan tarina myös suomeksi ulkona! Linkki juttuun löytyy suoraan biosta! ✨ #hwtstories #hwttarinat #hwtsuomeksi #tatuointitarinat #intovertti #äiti #tatuoitu #tatuoidut
"I’m an introverted person by nature, and I’ve needed lots of practice to gain the social skills that are needed in customer service. Many people seem to think that since I look like this, I must be a certain kind of person as well. Once a colleague told me that I’m actually very different than how I look. It was meant to be a positive comment, and after I thought about it for a while, I noticed that it might be true. Although I am like this and that might make me look like a tough person or something like that, deep down I’m super soft." - Jenni-Reeta New story is out again! Beautiful interview from amazing person, go check it out. Link in our bio 💙 Thank you again Jenni-Reeta for a great story! #hwtstories #humanswithtattoos #tattooed #tattooedmom #firsttattoo #dotwork #introvert #tattoos #ink #inked
Throwback Thursday! "This tattoo is also so personal for me because I got this a year ago, before my personal hell started. I had a major depression phase, and now I have recovered, or I am still recovering from it. This tattoo is a reminder about that time and that in the future I would take better care of myself and would not let that kind of things happen again. That… I was depressed, and I also had a phase when I thought it would be just better to surrender and stop pushing forward. But then I decided that I want to do things, I want to act and I want to make good things happen in this world." - Orna Orna is nowadays part of this really cool media collective @rareonkova talking about important topics like global warming. Go check them out and give them likes (texts are in Finnish)! Thank you again Orna for sharing your thoughts! #hwtstories #hwtthrowback #raremedia #mentalhealth #depression #burnout #survivor #health